Each state is associated with some form of folk and tribal art forms exhibiting its culture. Kerala includes numerous colourful folk dances. Let me mention the names of a few such rare art forms before proceeding further. Velakali, Ammanottam, Ezhamathukali, Kol kali, Dappu kali, Poorakali, Pen tharumo nritham (will you give me a bride), Thiyaattu, Padayani, Cherumar kali, Pallukali, Parayan thira, Kolam Thullal, Bhootham thullal, Thidambu nritham and many more. Most of such dance forms are deeply rooted in tribal culture, mostly of Wayanad and Malabar areas. I just want to give a small note on ‘nadodi nritham’ played on stage for competitions and purely for entertaining purposes.

Nadodi means tribal people or nomads who dress entirely different from normal people. Nritham means dance. So nadodi nritham is an art form performed in the costume of tribes and villagers.

Nadodis often perform different art items as a part of their celebrations and happiness. They carry some strange instruments as well as equipments. They are not much civilized till now. That’s the reason why, when this folk item is performed on stage, participants wear colourful dresses, big bindi, thick eye brows and heavy make up. They wear glass bangles and anklets with bells.

Its costume and acessories are strange 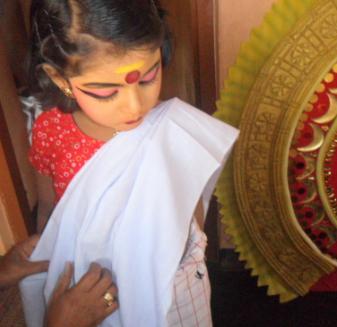 When it’s performed on stage, the participant may represent a tribal lady or tribal man with strange dress and accessories. They may use wooden or glass bangles, highly embroidered dress and heavy make up. Mirror works and sequences are given preference with bright colours, if the participant represents a tribal boy or girl. Often big Bindis are used by females. Their hair style also gives them a typical tribal look. They often wear jasmine flowers to give a classic look. Normally skirts with shawls are worn by girls and dhotis by boys. They never use gold accessories. Boys wear a turban to look traditional. Their shirts also reflect culture of ancient times, stitched in that way. Anklets enhance their foot steps.

Nadodi nritham is something similar to a theatre play. According to a folk song played, dancer places steps. In most cases, actions are over expressive showing emotions like hunger, thirst, sad, happiness, anger and love. A dancer is said to be efficient if he or she is intelligent with his/her foot steps.
Very often, it’s related to a single story, event or mix up of emotions from happiness to sadness. In most cases, the dancer comes to stage with a happy mood, tells some sad story with fast moving steps and over expressive acting. Again he becomes slow in steps before leaving the stage happily. But it’s to be noted that it’s not applicable in all cases.

Back ground most suited to the song situation may also be used to enhance the performance. Yet, it’s not at all compulsory.
Done by males and females

This performance art form is done by both boys and girls, but it’s never shown mixed up, in the case of contests. It’s also performed as single and group. In most cases songs are fast folk numbers with vigour steps.

Slow steps in the case of village girl

As I have mentioned earlier, there is no clear cut rules or steps for this folk dance. So, it doesn’t hold any traditional claim, except an entertainment quotient. Yet, classical steps are used for performance. Though it’s performed with fast steps most times, it can be used for showing village culture also. If so, slow songs with slow steps may be used to exhibit the character of a shy village girl to perfection. 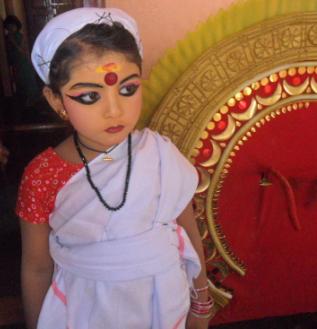 If it’s a village girl, costume is a bit different. She doesn’t resemble a tribal girl. Instead she resembles a Malayali girl. She wears dhoti, short blouse and shawl. Very often wigs are used for long hair. Jasmine flowers are also added. If it’s to picture a village girl or lady working in paddy fields, she may use a traditional scarf known as ‘thorth’ to cover her head. She will wear dhoti known as ‘mundu’ with big check designs. So, the costume of a Malayali village girl is mundu and thorthu. She wears silver thodayam as ear rings and a ‘Elas’ tied in black thread as chain. She may use black beaded chain too. If it’s the case of a tribal girl, she uses colourful chains, bangles etc. That’s the main difference. Also, she will be given a big bindi with a horizontal strip of chandan (sandal wood paste) on her forehead to indicate that she is a village girl of Kerala.

No electric instruments used for its song

As it’s a folk art form, it never uses modern instruments in the back ground. Traditional elements are given more preference. Usually, male voice is used for singing, also never given a chorus. So, it’s almost a solo performance well exhibited through acting and dance steps.

Hot Hits: 16998
I am a house wife who is interested in reading books, writing poems and experimenting new recipes. I always love to search web to explore new findings and interesting pieces of knowledge. I am a well-social person who loves to be in the midst of friends and try myself to be engaged in any form of activity as I believe 'Human life is the most precious thing that God has gifted us, with time being the most essential content of it'. So I desire to live each and every moment of life with full happiness and satisfaction.

Who is more reticent?

Top reasons for divorce: Part-2 (1237 Hits)
No married couple wants to end up getting divorced. It is not like they have planned for it. They try to put up with their partners for as long as they
How to improve digestive health (800 Hits)
Due to our modern lifestyle, we feel that digestion related disorders are a common problem. Thus, we neither give importance to them nor seek any help
Top reasons for divorce: Part-1 (854 Hits)
The bond of marriage brings the two people together. Initially, everything may seem okay and both of them slowly start discovering each other in the journey.

Why to choose mechanical engineering than other engineering branches
MECHANICAL ENGINEERING which is also known commonly as mother of all engineering because mostly all other Branches ,Topics, Syllabus and Concepts fall
History of Highway Engineering
1.Introduction to highways: The highways are one of the four major modes of the transportation i.e Airways, Waterways, Railways and the Highways.
Tacheometric Surveying - part 1
Tacheometry In Plane Surveying the various methods employed to do the surveying are Chain Surveying, Compass Surveying, Theodolite Surveying, Plane
"What is Surveying?" - Explained
Introduction If you have heard about or if you have worked with a construction project or if you have ever planned a travelling trip using the google
Engineering- The most sought-after degree
Engineering is one of the most famous and rewarding courses all over the world. It is one of the most sought after professional courses in India and abroad.