16 Vayathinile - "the film that changed the trend in Tamil Cinema"

Great artists together for a great film:

Hi friends in this article let us discuss about one of the oldest but superb films of KamalHassan, and it is none other than “16 Vayathinile”, which is translated as at the 16th age or at the age of sixteen. This is really an amazing village. I guess every KamaHassan’s fan would have definitely watched this movie and incase if you have missed this try to download form internet and enjoy this film. Maestro Illayaraja has done a great job in composing the music for this film, as all his songs were huge hit.

This is not a simple movie because each and every character in this film has done a great job and let me start with the Hero’s character.

i) Kamalhassan as”CHAPPANI”: The name Chappani is well known for innocent character in Tamil Nadu and this trend started only after this film. Kamal is an innocent man in the village and his innocent behavior and different walking style impressed everyone. Kamal was one of the leading young heroes at that time and even at that time he was very brave to do this character and at one scene he also appeared in one piece. This was the talk of the town, because no one would have acted in this character, except Kamal. This made many to predict that Kamal would became one of the best heroes of all time, not only in Tamil industry but also in entire India.

ii) Sri Devi as Mayil: She is considered as the beauty of the village, and everyone in the village like here. She was also educated and her dream is to become ea teacher. Everyone praised her beauty and this made her to think about marrying a well educated man. Chappani is hr cousin in this film.

iii) Rajinikanth as parattai: Our superstar “Rajinikanth” has done a negative role in this film and his character was very much appreciated by everyone. He often teases everybody and used to say “Idhu Epadi Irukuthu?” which means “How is it?”, to his group members. As a matter of fact this might also be considered as the start of using Punch Dialogue for Rajini. He later used the English version of this dialogue “Idhu Epadi Irukuthu?” as “How is it?” in of his films called “Veera”. Another important thing is that Koundamani was also in this group and he along with Rajinikanth, provided us a great entertainment. 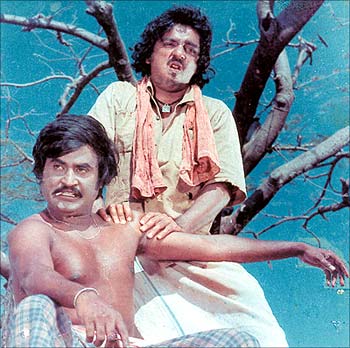 Why this film is very special?

This film is very special and it has many reasons and let us sees some of the main reason here.

i)    This is the first film for the director Bharathiraja. Later he became one of the finest directors of Tamil Film Industry, along with K. Balachandar. Baharathiraja is usually known for his village subject and it is nice to know that he started of his carrier with a beautiful village subject.

ii)    This is the first Tamil movie, which was entirely shot in outdoor locations and no sets were used. Credit goes to Bharathiraja for changing the trend of Tamil Cinema. Many followed his path after seeing this film.

iii)    This is also the first color film for Rajinikanth and even though he was seen in major part of the movie in the negative role, you will be surprise to know the fact that only 3 days of call sheet were enough for Rajinikanth to complete his part in this movie.

iv)    This film was blockbuster and earned around 5 crores (Present value) and as a result of this the producer of the movie went hiding since the producer was afraid of Income tax problems.

To start with let me just ask you to forget the present day cinema which involves all the graphics work because this film was completely shot in a village and it will never look as a movie, because it is so natural, thanks to the director and actors. So a practical story was handled very well by the debutant director “Bharathiraja”. So just imagine of a typical Indian village situation, before moving into further reading.

The film start sin a beautiful village and Mayil is considered as the beauty queen of the village. She is 16 years old and hence the name of the title. She has a dream and passion of becoming a teacher and so she wants to apply for a teaching job. Mayil’s mother (Gandhimadhi) was very much fond of her and also took a good care of Mayil. Another important character in this house is Chappani, who is Mayil’s cousin. Chappani like Mayil very much and he has his own dreams of marrying her. But on the other hand, Mayil never cared about Chappani and never thinks about the help done by Chappani.

At the same time the village has a gang, lead by Parrattai and their main takes is to make fun of everybody they see. Rajini the leader of this gang has the habit of teasing Chapani also and at the same time he uses Chappani very well to complete his entire task. The innocent Chappani doesn’t know about anything and he used to do every work assigned by the people of that village. He is also very good hearted and in once scene when some small boys of the village tried to kill a lizard, Chappani pleaded them not to kill and couldn’t tolerate the sufferings of the lizard. This is a great proof to explain the Chapani’s character.

Mayil, who is considered as the beauty queen, is always motivate by others that she will marry a well educated man, form a town. This made her to dream about her future and slowly and steadily she also decides to marry a well educated person. It was during this time a Doctor arrives to the village and it is shown as if they both were in love. But later Mayil realizes the truth, when the doctor tried to misbehave with her. This incident spreads like a fire and everyone doubts the character of Mayil. Parattai also tells badly about Mayil and stops her marriage. Later the death of Mayil’s mother has changed her entire character and she slowly understands the reality of who is working and helping for her benefit.

Slowly she was inspired by Chappani’s innocent character and also decides to marry Chappani. But Parratai, who always had an eye on Mayil tries to misbehave with Mayil when Chappani was not in home. But fortunately Chappani comes to that place and in order to save Mayil, this innocent man, kills Parattai. Then he was arrested and the film ends as Mayil waits for Chappani’s return.

Hope you enjoyed the review and I am sure you will enjoy the movie, when you watch it.

Should Dhoni continue as Indian captain for One day international?