History of cooking and baking

Cooking is an art that needs dedication and more than anything interest .Over the centuries human beings have perfected the art with so many inventions , that now food is one of the biggest industries ever. Right in the beginning of recorded history there was the discovery of fire making, which probably led to the discovery of making food tastier and easier to consume by using heat .

People then discovered that with the help of heat and grain, one was now able to prepare a kind of broth and hot stones were covered with this broth or the broth was roasted on embers and that was how flat bread was created. This ability to prepare stable food radically changed the eating habits and lifestyle of our early ancestors, from being hunters they became settlers.

We see that already in the years 2600-2100 B.C. bread was being baked by the Egyptians. In fact, it was the Babylonians who were the pioneers of baking . The royal bakery of Ramses and also Greek royalty had their cooks making bread and cakes, some shaped in the form of animals and used for sacrifices in Egypt as well as in Greece.

Greek scholar Aristophanes’s ( 450-385 B.C) early writings show the existence of honey flans and patterned tortes. According to Aristophanes, the ancient Greeks also made a certain type of doughnut made from flour and honey called “Dispyrus” a ring-cake that was submerged in wine and consumed hot. So, this is how baking began and over the years became a very integral part of world cuisine...

I am presenting here a few baked recipes which are my personal and family favorites that are besides being tasty are also healthy and very nutritious. 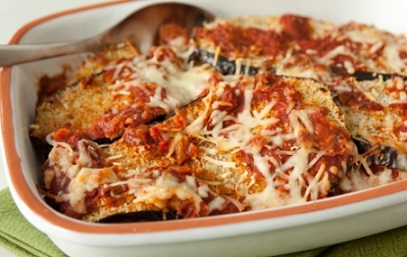 Salt and Pepper to taste

In an oven proof flat dish pour some olive oil and add the finely chopped garlic, salt , chilly powder and some of the coriander leaves mix thoroughly with a spoon . Arrange the halved brinjals in the dish after coating them well with the oil and spices. Bake for 8-9 minutes on medium heat until the brinjals are tender.

Heat oil in a pan and add the chopped onions and fry for a while after which add the tomatoes and fry well, add salt and pepper and rest of the coriander leaves and take it off the stove. Spread the tomato mixture on the baked Brinjals .

Alternatively you can sprinkle grated cheese on top at this juncture and put in the oven for a minute after which the dish is ready to be served with either steamed rice, Chapathis or on Toast.

Baked chicken with spinach and mushrooms

One cup stock made from stock cubes

Mix the yogurt with salt, pepper, curry paste and the coriander leaves and add the chicken pieces to it and let it stay for 10-15 minutes.

Heat the olive oil and add the chopped onions, garlic and ginger. Fry for a while and stir fry the mushrooms and the spinach, adding salt and pepper. Transfer half the contents to an over proof dish which has been smeared with butter on the inside.

The dish is ready to be served with bread or rice...

( Alternatively you can add a few small potatoes to the dish. Peel the skin and prick with a fork all over and stir fry along with the mushrroms and spinach )

You can use any large fish cut into boneless fillets. You can also make this dish using prawns instead of fish.

Fish of your choice – half kilo

Spring onions one bunch cleaned and chopped to small pieces

Salt and pepper to taste

Lime juice 2 table spoons or more if you like

Olive oil or any oil of your choice

Marinate the fish with lime juice, salt and pepper and keep aside for a few minutes .

In a flat oven proof dish add the olive oil and spread it evenly. Add the chopped garlic , ginger, onions, spring onions , coriander leaves, salt and pepper. Mix well. Place the fish pieces in the dish making sure that the fish gets coated with the oil and herbs. Bake on medium heat for 10 minutes. Transfer to a serving dish and pour out all the juice that gets accumulated on top of the fish...

This is a great dish that goes well with anything ( rice or bread ) or can be eaten by itself.

Salt and pepper to taste

One cup stock made with stock cubes

Heat oil and fry the onions and green chilies. Add the potatoes and carrots and then the French beans. Mix well. Add the peas , capsicums , cauliflowers and the mushrooms , salt and pepper and take off the stove. Spread the vegetable mixture evenly in an oven proof dish. Pour the stock over it and bake for 20 minutes in medium heat. Take out and stir thoroughly and spread the cheese on top and bake for another 3 -4 minutes until the cheese turns brown and the dish is ready to serve with either toast or steamed rice. (Alternatively to make it even more nutritious you can beat two eggs and pour on top after it is taken out. Spread cheese on top and bake until the egg sets and the cheese melts and begins to brown.) 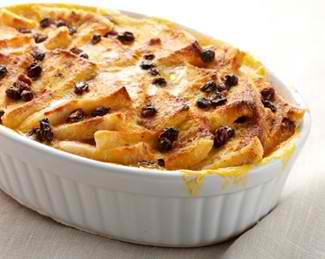 A baked dessert is not only healthy but can also be very tasty. I am giving a recipe here for a Bread and Butter pudding which is a traditional English dessert but can be done with slight variations for added taste.

Apply butter generously on the bread slices on one side . On the other side apply Marmalade.

Arrange them on a oven proof dish. Beat the eggs until frothy and add the sugar and the milk mix well until creamy. Add the nutmeg powder and mix well. Pour the egg mixture over the bread slices and sprinkle with walnuts and raisins. Bake for 20 – 25 minutes on medium heat and serve either warm or cold. The pudding tastes good either way.

(Traditionally Bread and butter pudding is served with a custard, that is made by mixing custard powder that we can buy from the shop with boiling sweetened milk.)

Hot Hits: 2157
I love books and reading. My other hobbies include gardening, travel, music and cooking ...

Excellent! These are some really great and delicious ideas!

Thanks a lot Kalyani

Thanks a lot Uma Ganesan

Good article and I loved to know about the dishes you mentioned here. In fact my wife is a fan of recipes and she does a lot of it. I made her too to read this article and she enjoyed getting all these great information.

Thanks from both of us...

Good article and I loved to know about the dishes you mentioned here. In fact my wife is a fan of recipes and she does a lot of it. I made her too to read this article and she enjoyed getting all these great information.

Thanks from both of us for sharing your ideas here.
Regards.

Thanks a lot Samir, I too love cooking and experimenting with recipes...Glad your wife liked the recipes

who can be the best succeessor to zaheer khan in indian pace bowling?

who can be the best succeessor to zaheer khan in indian pace bowling?

Top reasons for divorce: Part-2 (3038 Hits)
No married couple wants to end up getting divorced. It is not like they have planned for it. They try to put up with their partners for as long as they
How to improve digestive health (2157 Hits)
Due to our modern lifestyle, we feel that digestion related disorders are a common problem. Thus, we neither give importance to them nor seek any help
Top reasons for divorce: Part-1 (1731 Hits)
The bond of marriage brings the two people together. Initially, everything may seem okay and both of them slowly start discovering each other in the journey.