Sridevi's death and the Mystery Created 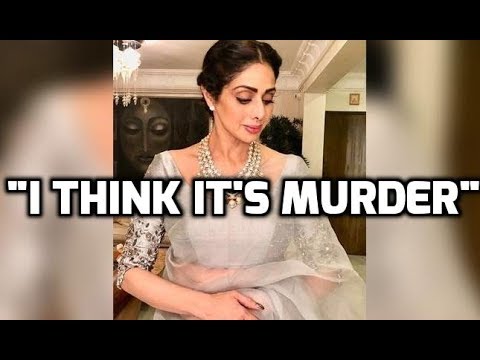 Life is full of ups and downs. It is never a straight line and the same applies to the life of the superstar Sridevi. The death of this actress has shocked the nation and there is no doubt that most of the people who see films in India are affected. Sridevi had a special place because she was a versatile actress and well of course, very beautiful.

Unfortunately, she died in Dubai and I have to say that this death is not an open and shut case. Every Indian citizen when he or she dies anywhere and under unnatural circumstances has the right that his or her death is investigated. In the case of Sridevi also there is a need for her death to be investigated. The Dubai authorities have said that there is no foul play. Perhaps they are right but there is a lingering doubt and this must be set at rest

Let us evaluate the news as it was broadcast. Firstly it was announced that Sridevi had died of cardiac arrest. In other words, she had been killed by a heart attack. This news shocked many of her friends including the brother in law Sanjay Kapoor. He said that she never had any heart problem and so  I wonder how this news of the cardiac arrest spread subsequently.

It was again announced that no, she did not die of cardiac arrest but she had drowned by accidentally falling into the bathtub. On the face of it, this is very silly because for a person to die in a bathtub he or she must be so sozzled with a drink that he or she doesn't know what was happening. Now we know that Sridevi never drank hard liquor like whiskey or Gin and all she imbibed occasionally was a glass of wine.

Amar Singh who is a family friend has corroborated this information, so the question that Sridevi was intoxicated or on the high and fell into the bathtub and drowned looks preposterous. The Dubai Coroners office has written in the autopsy report  that the actress died of "accidental drowning." How the Coroner reached this conclusion is a mystery. One must remember that the bathtub is not a  swimming pool and to drown in just about 2 feet of water is something which is totally unnatural.

As I have written Sridevi never drank and yet the autopsy report states she died of accidental drowning and traces of alcohol was found in her blood. The fact that she never drank hard liquor adds to the mystery.

There are many people who suspect foul play and one of the men who has voiced an opinion that Sridevi was murdered is Subramanian Swamy, now a member of the BJP think tank. Subramanian Swamy has said in a taped interview that he is aware of a  nexus between the Underworld led by the Don Dawood and Bollywood. He has further added that this nexus maybe the cause of Sridevi's death.

This looks preposterous at the moment but one must remember the case of the wife of Shashi Tharoor the Congress member of parliament. His wife had died and it was let out that he had died of an overdose of medical pills. Forensic experts reconstructed the scene of the crime and finally concluded after almost a year that she had been murdered. The Delhi Police are still investigating the case and the murder suspects as yet have not been identified and arrested.

This is just an example to show that what is apparent is not real and what looks likely may not be the ultimate truth. In this case, even the likelihood that she could have drowned in a bathtub when she was healthy and fit is something that cannot be digested. Taslima Sharif, the writer from Bangladesh who has been hounded out from that country by Muslim extremists and is now settled in Delhi has said in a statement that "healthy people do not drown in a bathtub".

This is a very telling statement and there is no doubt that there is a lot of truth in it. Sridevi has now died and she has also been cremated but her husband Boney Kapoor has a lot to answer as many factors in the timeline do not match or gel together.

The Kapoor family would like the case to be closed so that they can get on with their lives. But everything cannot go on just as required. The police in India needs to have a fresh look and try and come up with a plausible theory. Drowning in a bathtub on one's own is not the correct answer. What, in case somebody ha caught her and pushed her into the tub and held her till she died?

The case must be investigated for the satisfaction of millions of her fans who dot the length and breadth of India.

Can subcribers get more cheapest call rates with MOBILE PORTABILITY?