Brave women who contributed toward freedom of India

India became a free country in 1947 although it was only half the independence as we lost two big parts of motherland in the name of Pakistan. That is what we got after a long struggle to get our freedom from the clutches of foreign invaders. They ruled more than two hundred years on before leaving this country and would have been still here had it not been for the brave men and women who fought gallantly against them. If we go back into the middle of 18th century, we shall see that this was perhaps the most crucial time when the fight for freedom began and women took as active part in it as men did.

The famine in 1770 was the trigger point, which agitated Sadhus and saints of this country to revolt against British who did nothing to save dying Indians that perhaps motivated them to take our country out of clutches of foreigners. We often read about our male freedom fighters but women did not leg behind in the struggle for fight for freedom. Let us know about some of those big-hearted women who fought for the cause of freedom for their motherland.

We know women like Laxmibai the brave queen of Jhansi, queen of Ramgarh Avantikabai who led the fight from the front, the lady from Budri who helped built revolutionary funds and revolt of Begum Hazarat Mahal against British will always be the golden chapters of Indian history. We have another example of woman contribution toward freedom struggle of India that perhaps is the unique most in itself. Azizen a professional dancer found the cause for freedom as fascinating that she stopped dancing and began gathering women in night hours to train them to help revolutionaries in every possible way. Later she came to Kanpur where Tatya Tope one of the greatest among the contemporary revolutionaries had been active those days. 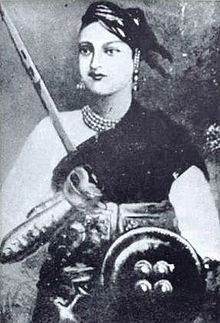 Whenever we shall mention Indian freedom fighters and their great efforts, especially by women, Rani Laxmibai will stand in the forefront of them all. She was brave girl right from her childhood with full-fledged martial training who was expert in fighting, riding and other planning level expertise in chalking out strategies of war. She was full of bravery, self-respect and had immense love for her motherland. She fought many wars against British in the battlefields as well hidden when it was so demanding. She was in close contact of other revolutionaries of her time who were fighting to set India free from the clutches of foreign rulers.

Rani Laxmibai the queen of Jhansi, declared war against British and fought with them with her adopted son tied on her back having a single thought in her mind to see India free from ruthless British rule. But as it was a common practice in that period, there was no dearth of traitors and back-stabbers, who informed British forces about her whereabouts.  The British forces surrounded her and followed her until she was left with no force and ultimately was killed by a fatal sword of a British soldier. Rani Laxmibai is no more but she will always remain in the memory of every Indian who loves this country.

The Begum of Nawab Wajid Ali Shah popularly known Begum Hazarat Mahal took the reins of Oudh after her husband was kept under house arrest by British. It was around 1857, when the freedom movement was in its full gear. The British found this intolerable and surrounded the state of Oudh with heavy forces. The Begum fought with all her strength and even wrote a letter to the Queen of England expressing her concern about her willingness to live in free air. She wrote to Queen Victoria ‘If you are living in free air how you expect to live others in slavery, this was sheer injustice’ but Queen of England had no answer to Begum Hazarat Mahal.

Begum even attacked through her secret armed attackers on the British headquarters, The Residency, which caused British army lots of troubles. However, the Begum made a statically wrong move to fight with them directly on the ground level that caused her defeat. She went to Nepal ultimately and died there later but she will be among the one who will always be in the history books for her gallantry.

Azizen the community dancer from Nitur was another example of our women revolutionaries who was a dancer by profession but her attraction toward freedom fighters and movement was so spellbinding for her that she stopped dancing and participated in freedom movement. She gathered women from her surrounding areas to teach them about freedom movement and trained them in different matters related to how to help freedom fighters. In fact, she formed a whole women-brigade who participated in the movement secretly.

Azizen set another strategy to help the cause by wearing male dress in day hours and supply as many arms to revolutionaries and as much money as possible along with strategic information she gathered from the British army. Her dance was very popular and regular feature among the British soldiers, which she did for the particular purpose of gathering information and giving it to Nana Saheb and Tatya Tope. Later when she was captured during Kanpur phase of struggle for freedom fighting and was brought in front of General Havelock. The general found her beauty so astounding that he offered her to pardon on condition if she confessed herself guilty and surrender herself to general. Azizen refused and accepted the death-sentence, executed immediately by the firing squad.

Chennamma the queen of Kittur

Who can forget the famous queen Chennamma of Kittur a small place in Belgaum district in Karnataka, who gave stiffest of fights to the British army as one of the most fearful revolutionary force India has ever fought. Her fighting force was so immense that British army was unable to face her but she was captured due to some of her own unfaithful people who back-stabbed her helping British forces in capturing her. She was sent to nearby Dharbar Jail where she died later. She set an unforgettable example and will always remain in Indian history for her contribution towards the great cause for freedom along with other great freedom fighters of this country.

Conclusion of this chapter of brave women of India 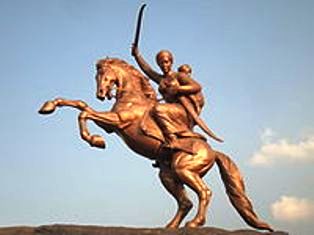 There are thousands of such examples of women, who fought gallantly for the cause of freedom for India. The history will never forget the women like Umda Begum of Oudh, who was hanged by British government for her contribution to the cause of revolution. So was the case of Bhimabai Holker who fought until she breathed her last but kept fighting for the freedom of her country. Who can forget the contributions of Tahkurain of Buddi Baijabai, Alia Begum, Vassi Begum and Devi Choudhrani who participated with all their might for purpose of liberty for their country. They displayed to the world that women are not the weaker citizen or showpieces but real fighters as well when needed to stand together with men.

Indian women like Mohasiya, Bera Maina, Haseena Zameel, Asha Devi, Rani Tejabai, Ganga, Ekka, and Surabhi also contributed with all their might for freedom in their own ways. Women fought from the front in Meerut in 1857, they were shot at when they tried to hoist the Indian flag on  Fort of Mysore. Women lead from the front and we can prove from various examples available in every part of our country.

Hot Hits: 2506
I am having fun with a laptop and few cameras.

Which is the best Contest In bodduan ?

There are many contest in bodduna, which one you like .. vote it .....
Message!

Top reasons for divorce: Part-2 (979 Hits)
No married couple wants to end up getting divorced. It is not like they have planned for it. They try to put up with their partners for as long as they
How to improve digestive health (647 Hits)
Due to our modern lifestyle, we feel that digestion related disorders are a common problem. Thus, we neither give importance to them nor seek any help
Top reasons for divorce: Part-1 (735 Hits)
The bond of marriage brings the two people together. Initially, everything may seem okay and both of them slowly start discovering each other in the journey.

Donald Trump Praises Putin and other 'Strong" leaders
The US election campaign is in full swing and in just a few months on 8th November the die will be cast. There are 4 candidates, but only 2 matter. These
Donald Trump is the first politician in the west to Identify the source of terror
The last week has been a traumatic period for the world. There have been at least 5 terror attacks and in one of the most reprehensible incidents an old
The Unfortunate Kashmiris
Every passing day makes solution to the ever burning Kashmir problem look more difficult. Nearly seventy years after independence all the three affected
Curtain has gone up and Hillary leads in the opinion polls
The dust has begun to settle and the stage show has commenced with the curtain going up. The battle lines are drawn and the candidates on the verge of
It's official: Hillary will clash with Donald
The American election is a 4-year affair. In addition by an amendment to the US Constitution, an incumbent is restricted to just 2 terms. This is wonderful