Dubai and its Fascination For Cars 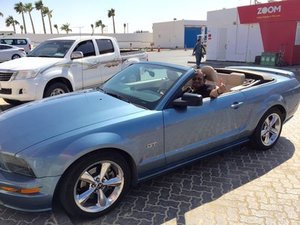 Photo of Mustang by me

Oil changed the lifestyle of Dubai and overnight it was transformed into a vibrant city. Money from oil fueled an upsurge in the development and when the British left, they left behind a state that was on the threshold of a gigantic lift-off.

Petro dollars flowed in and Dubai became a metropolis that rivals the best cities in the world. Much of the development of Dubai was powered by expatriates from the sub-Continent. Many of the expatriates were blue collar and qualified workers and managers who drew very high salaries.

This abundance of cash brought in an auto revolution in Dubai. The locals sheikhs flush with money picked up the biggest and fanciest cars. Dubai became a sellers markets for  luxury automobiles. It became the biggest market for the Rolls-Royce, the epitome of luxury as far as automobiles are concerned. One can gauge its value as the Rolls Royce Phantom is marketed in India at a cost of Rs 4.53 crores. At one time it was the most sought after car by Indian royalty and the Maharajah of Patiala  reportedly had a fleet of 36 Rolls. One of these was even used to carry garbage.

The maharajah has gone with the wind and their place is taken by the Sheikh from Dubai. It is reported that over a 100 Rills Royce cars are sold every year in Dubai, making it the biggest market for rolls Royce, more than the UK itself. A drive around Dubai will reveal a dozen Rolls cruising along the roads at any given time.

The expatriates also joined the car splurge and with high salaries and easy finance  cars like the Ford Mustang, Mercedes, BMW, Porsches and other luxury brands were sold in Dubai like hot cakes. The city shows affluence and it's no wonder that it, along with the UAE has one of the highest per capita incomes in the world.

There was a moment of alarm in 2008 when the construction boom tapered off and recession had set in. At that time many expatriates who could not pay for their car loans having lost their jobs just ran away from Dubai, leaving the hypothecated cars at the airport. This was the big flight and at one time it was estimated that nearly 3000 cars were left at Dubai airport, with the keys in the ignition slot.

This was just an aberration as the ruler of Abu Dhabi bailed out Dubai and very soon Dubai was back on its feet. The old swerve has come back and once again the cars and the expatriate force has returned. Dubai is also aided by the finest road network in the world and one can cruise at 200 km an hour without batting an eyelid. One cannot dream of driving at these speeds in India even on the so-called freeway between Pune and Mumbai.

Dubai is home to the biggest brands in the auto industry and despite Dubai having no oil unlike Abu Dhabi which has billions of barrels in reserves, the economy of Dubai is diversified as a tourist and business centre and its is healthy and ticking. Not many know that Dubai rivals London as a business centre and even the ICC( International Cricket Conference) has its headquarters here.

The cars in Dubai are sold with minimal taxes and are cheap. Unfortunately, the Maruti, the staple diet of Indians is never seen in Dubai as it is felt to be a low-grade car, unfit for the super roads of Dubai. The luxury S-Class Mercedes and high-end Volvo, Toyota, Impala, Maybach, Ford Mustang, Porsche and Bentleys are great sellers here. The Rolls-Royce has a special niche for itself and most Sheikhs will drive this as a symbol of status.

Along with the cars, there are also repair centres which service these cars. Most of them are staffed by mechanics from India, mostly from the state of Kerala. They do a good job and its to the credit of India. What surprises me is that Indians when they go abroad work so hard and yet when in India, the Indian worker looks for ways to shirk work. What a contrast! I wonder who can explain this?

Dubai is the modern El Dorado, the proverbial city of gold. No wonder many Indians want to work here. It's much better than Saudi Arabia, which is more like a closed world and you may have money but life is bleak. The automobile has revolutionized Dubai and the camel, the old ship of the desert is now a relic, for tourists to sit atop and ride it for an experience. So far so good, but there is always a sense of unease as what happened in 2008 is not revisited again.

Does expectations hurt? This is funny question, vote it ,wht u think,..
Message!