Indian Politician : I Am Right You Are Wrong 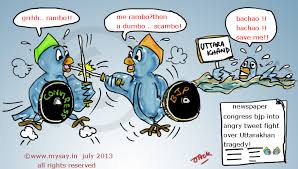 The cloudburst in Uttrakhand has led to daily outbursts at each other by the representatives of the two national parties on TV channel debates on the unfortunate tragedy. That a state has faced devastation of gigantic proportions leading to immense losses and needed words of comfort and support was of no concern to these so called national parties. They were only interested in scoring debating points against each other.

It all started when the PM in waiting visited the hapless state. He did so after the PM and President of Congress had an aerial survey of the affected areas and announced a Rs 1000+ crore relief. How could the CM wanting to be PM remain behind. It is normally not expected that CM's of other states visit, that too within a day or two of tragedy striking a state. It amounts to interfering in the affairs of another state.

What followed was almost both a tragedy and  comedy. It was claimed that more than 15,000 tourists of his state had been rescued during his one day visit. This acted as a trigger to forces opposed to him and his party. The TV anchors were waiting for such an opportunity. Daily in almost all news channels the representatives of both the national parties were pitted against each other by the smart anchors.

While Uttarakhand was tackling the tragedy and the valiant defence personnel were evacuating the stranded tourists and others from the affected areas to safety, the politicians were outshouting each other debating earth shaking but otherwise mundane issues, whether it was proper for the CM who wants to become the PM to visit the state or about the whereabouts of the other PM in waiting or the statement of the Home Minister, that VIP's should not visit the state. The tu tu mein mein went from bad to worse every progressing day and many a time as a viewer I felt like hitting my forehead as to how low can politicians stoop just to score a debating point.

The defence personnel were the real saviours of more than a lakh affected people. It is already being stated to be the largest airlifting of disaster affected survivors in the world. They were the real heroes. But they received very little attention in the media. Occasionally during the useless debates someone would draw attention to them and for a moment the politicians would pay lip service and immediately jump to berating the opponent.

Why has the political discourse in the country become so bad that it is now becoming worse every passing day? Why is there no tolerance for each other's opinion between the major political parties? Why is there no self constraint even during natural calamities? Why has humility gone out of the system?

It seems the service aspect has been discarded by the politicians. They look upon themselves as arm chair corporate style managers. They now manage elections. They manage funds. They manage positions and favours. They manage self enrichment. They manage career of their sons and daughters. They all the time are busy managing and in the process they have lost touch with the very voters who have elected them to assemblies and the parliament. Because they have learnt the skills of managing everything to their advantage they start believing that they do not require the voters. Because they will manage their reelection also.

That the national parties are in power in a handful of states does not seem to motivate them to return to grassroots and regain the faith of larger number of voters. It is too small an activity now and below the dignity of most of the politicians to move in the 'fields and streets'and come in contact with the common persons. More than one third of the elected politicians hail from political dynasties and do not need the grassroot support as their family power and connections will get them the tickets fin the next elections. So where is the need for gaining the confidence of the ordinary citizen. Everything will be managed.

Therefore politics is today seen by most of the politicians as a corporate activity. Corporations have to be always in profit. Losses cannot be tolerated. Corporate wars have to be fought to retain hold on the markets. Minds of the people have to be conditioned to one's product's qualities. Power is everything. Service is secondary.This leads to giving not an inch to another's viewpoint. Tolerance is seen as a sign of weakness. One has to look and appear tough. The other's viewpoint has to be demolished at any cost. Iif in the process one has to stoop low and resort to lies and more lies it is an acceptable behaviour. Agencies have to be employed at public expenditure to propagate one's viewpoint.

It is therefore not at all surprising that while Uttarakhand was suffering the politicians were busy protecting their turf at any cost. The selfless service of the defence personnel was incidental.

You Have any best friend during Your collage Time ?

You Have any best friend during Your collage Time ? This is funny poll, vote it..
Message!

Top reasons for divorce: Part-2 (804 Hits)
No married couple wants to end up getting divorced. It is not like they have planned for it. They try to put up with their partners for as long as they
How to improve digestive health (531 Hits)
Due to our modern lifestyle, we feel that digestion related disorders are a common problem. Thus, we neither give importance to them nor seek any help
Top reasons for divorce: Part-1 (648 Hits)
The bond of marriage brings the two people together. Initially, everything may seem okay and both of them slowly start discovering each other in the journey.

Need for more pragmatic policies to harmonize development
The present Central Government is presently seen as a very arrogant Government, which wants to somehow push through legistlation, even if such legislation
Need for overall development, not region-specific or location-specific
There have been many agitations for development in many parts of our country.  The recent history of the State of Andhra Pradesh being split into
Treasure chests of Management lessons
What the crème – de – la- crème of Business schools Stanford, Wharton, Harvard and the IIMs are teaching about the intricacies and nuances of
Is Tata Motors Limited A Global Company?
The international competitiveness of a firm harboring ambitions to grow big across a wide geographical spread primarily hinges upon its ability and competence
The New World of Advertisement - Game Changes!
The role of advertisement in commerce, trade and industry has been significant for many decades from now but in recent times it has been witnessing a revolutionary