Who is Lee Teng -Hui?

Hai friends in this article we will discuss about the famous personality who was the  president of the Taiwan for about 12 years from 1988 to 2000 and he is none other than Lee Teng-hui, as he served as the president of the country from 13th January 1988 to 20th May 2000.In the history of Taiwan, he is considered as the popular president of all time.The reformation of the Taiwan's political system was possible only because of Lee Teng - Hui as he was responsible for making Taiwan  more democratic. 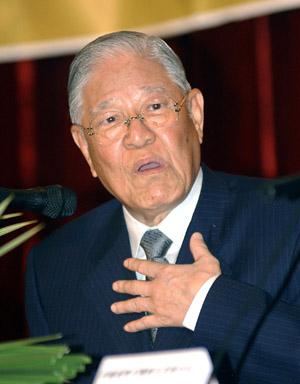 About his Early life...

Lee was born on 15th january 1923,  in Sanchih,which is  a small farming community near Taipei, Taiwan's capital and it is also the largest city in the country.His father was not a rich man but could able to manage the local irrigation service,which was an important job during that time in a rice-farming region. When he was young,the country of Taiwan was under the colony of Japan, as Japan captured the island in 1985 from China during a war .

This island consists of more than 99% Chinese population and inspite of this majority population many were not allowed to continue their higher education.But fortunately Lee was lucky as he was one of the only four Chinese students in his high school class and he ultimately graduated with honors and also got a scholarship from Kyoto Imperial University in Japan, which he attended in 1945.The picture ebelow shows Lee at his young age

Back to Taiwan for its development

In this section we will discuss how Lee was able to help for the developmnt of Taiwan after finishing his higher studies in USA and returned to taiwan.Taiwan was returned to Chinese control when Japan was defeated after the Second World. Lee also entered the National Taiwan University.In 1948, Lee received a bachelor's degree in agricultural science.He was able to get his Masters degree after he was admitted to the University of Iowa in the United States,in 1952 in the discipline of agricultural economics.

After finishing his studies Lee returned to Taiwan and worked as an economist with the Joint Commission on Rural Reconstruction (JCRR). With the sponsorship from an institution in USA,Lee was able to rebild the Taiwan's inefficient farm system into modern one.While he was JCRR, Lee was active in establishing these farm associations,and he also modernized the irrigation system.Apart from this he also took care in setting up rural health program

During the 1960's(mid 60's) Lee again  returned to the United States,and this time he  received a doctoral degree in agricultural economics from Cornell University in 1968. After receiving the Doctrate degree he returned to taiwan in 1968, and joined the cabinet as minister without any portfolio, but with special responsibility for agriculture, as he proved to be an expert in this field

This promotion to the central Government made Lee capablities recognized by all people in taiwan. and ultimately in he was appointed mayor of Taipei in 1978.  The Taipei's chronic water shortages. was set u and the credit goes to Lee as he was responsible for instituting the region's reservoir system.Apart from this he is also responsible for creating  modern sewage system. All these activities made Lee governor of Taiwan province in 1981 an with the help of this powerhe was able to introduce the new irrigation system and other reforms.

President Chiang Ching-kuo chose Lee as his vice-presidential running mate in 1984  and they also able to win the election. It was during that time, where the president and vice president were elected by the National Assembly, acting as an electoral college. This win by Lee made him as the first person of Taiwan descent to be at a major position in the Government, becausre before the government had been dominated by mainland Chinese who had retreated to Taiwan with President Chiang Kai-shek, Chiang Ching-kuo's father, after Communist armies captured all of mainland China in 1949.

The president at that yime Chiang Ching-kuo had started the process of liberalizing Taiwan's government and its single-party ruling system and he also ended the Martial Law in 1987 which was inmposed from 1949.But Chiang Ching-kuo died suddenly in January 1988 and  this made the Vice president Lee to succeeded him as president and leader of the Chinese Nationalist Party
Lee as the president

During his presedential period,Lee completelt reformed and democratized the political system of Taiwan He alsoended the one-party dictatorship and he also created a multiparty parliamentary system. He was also responsible for making the posts of governor of Taiwan and mayor of Taiwan's major cities elective, rather than being appointed. Lee was elected president for a six-year term by the National Assembly,in March 1990 and after that he immediately set about amending the constitution to be democratic so that President can be elected by the people through vote.It was in March 1996, Taiwan’s first direct presidential election and Lee managed to win  the election with 55 percent of the vote.

Lee worked to ensure the continued prosperity and security of Taiwan in the face of threats from the People's Republic of China (PRC). China claims sovereignty over Taiwan based on past centuries of imperial Chinese control and is politically embarrassed by the island's functioning democratic institutions. As Lee attempted to secure a closer relationship with the United States and a greater measure of international acceptance for Taiwan, China responded with military threats and conducted military exercises near Taiwan that included firing missiles.

However during the March 2000 reelection as his part vice presidential candidate was defeated by the opposite party  by the candidate Chen Shui-bian and this marked the end of 50 years domination of the Lee's party. Naturally Lee took responsibility for the defat and stepped down as the leader of the patrty.Eventhough lots of controversy arouse after 2000, when he stepped down from the President,he is still consider one of the famous person in Taiwan history.The image below shows the Biography o Lee Teng - Hui written by Richard Kagan

Hot Hits: 3769
Trying to be a good boy and also help others whenever possible.... should stick to my motto "Never Give up..... Life is beautiful... Enjoy the life"

Top reasons for divorce: Part-2 (589 Hits)
No married couple wants to end up getting divorced. It is not like they have planned for it. They try to put up with their partners for as long as they
How to improve digestive health (396 Hits)
Due to our modern lifestyle, we feel that digestion related disorders are a common problem. Thus, we neither give importance to them nor seek any help
Top reasons for divorce: Part-1 (473 Hits)
The bond of marriage brings the two people together. Initially, everything may seem okay and both of them slowly start discovering each other in the journey.

Unnecessary Formal Management Processes May Lead to Unexpected Results
Overview  Today, many buzzing words in managements are dancing in corporate world. Today's communication is full of new terminologies such as WhatsApp,
Small Eateries -- Bottom of the Pyramid, really!
The late Prof C K Prahlad, the most famous Guru of Corporate Strategy, had come with a concept called the "Bottom of the Pyramid".  He had advised
Women entrepreneurship
As women are now overtaking their male peers in terms of education and they are highly educated when it comes to higher degree education in today’s modern
Want sponsors for your blog? Follow this
Many people start blogging task for money making purpose. There is nothing wrong in it because a good blog can earn good and steady income for you. In
Top Reasons to Own a Mobile Website
Introduction Majority of the Internet marketers are currently heading towards mobile face of Internet in addtion to the SEM and SEO to create brand awareness.