Buddha - a Heart Full of Love

Here is a religion that never cared about God, but survived 2500 years and still practiced by about 500 million followers worldwide. It is the story of one enlightened man, his fearless journey in search of truth behind the misery of life; and the way of life he taught to the common people. He is none other than Buddha, the great master, the embodiment of love and compassion, and who was even ready to sacrifice his body for an innocent goat. Though he did not accept God in his noble path, Buddha is being worshipped as incarnation of God, by the people worldwide. 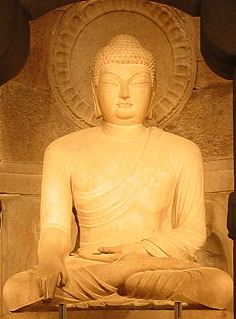 About 2500 years ago on a full moon day Siddhartha Gautama was born in a royal family in Kapilavastu. King Suddhodana of Shakya clan was his father and Queen Maya Devi his mother. At the age of 16 he was married to Yasodhara and they had a son named Rahul. After living in the extreme luxuries of palace, at the age of 29 he had a desire to see the outside world. On his trips he saw real life with its different faces such as sickness, old age and death; and felt himself within the heart that he should not enjoy luxurious life in the palace when people were suffering in the outside world.

Abandoning the luxuries and lavishness of royal life, he stepped out of the kingdom, and started the life of a wandering monk. He wanted to help people and end their misery. He was determined to find truth. By eating almost nothing and facing harsh poverty, he practiced meditation expecting a solution for his deep rooted problem. But he could not get the answer. Experiencing the extreme positions of both luxury and poverty, he understood the vanity of those paths and finally decided to adopt the ‘Middle Way’ to seek the truth. After deep meditation, sitting under a pipal tree, known as Bodhi tree, in Bodh Gaya, on a full moon day, at the age of 35, he became enlightened and came to known as Buddha.

In the beginning there were Buddha and his five disciples and the journey continued for next forty five years through different parts of the country, spreading is teachings and helping all kinds of people, including beggars and kings. For 80 years he lived in this world with fearless thinking and unselfish service, with a brain filled with infinite knowledge and a heart filled with innocent love.

It is believed that Buddhism is neither theistic nor atheistic, but is agnostic. It was said that when asked about the existence of God, Buddha used to keep silent without himself denying or accepting the existence of God. In other cases, it is also reported to have said that the Noble Eight-fold path of enlightenment did not require a belief in God; God was a superstition created by the priest class. As per Buddha all ceremonies, worships and prayer were pure nonsense. The concept of God makes people weak because they depend on God for everything.

Buddha understood why people suffered and how they could overcome suffering. With his boundless heart and great intellect he taught everyone how to live to attain peace of mind. He became one among the masses, knew their feelings and talked in their language so that everyone could understand. He advised them to stay away from blind faith and to accept his words only after they convinced themselves that his teachings were right.

The three universal truths applicable to everything, as per Buddhism, are given below. It may be noted that these are similar to the modern scientific laws.

When Buddha was enlightened he became fully aware about the Truth he was searching for all those times – the cause of sufferings and the methods to eliminate them. These realizations are known as the Four Noble Truths of Buddhism. By mastering these truths one can attain Nirvana, the ultimate goal, a state where mind is perfectly peaceful and completely free from ignorance, greed and all negative qualities, which everyone can attain in this very life itself.  Interference of a God is not required to attain Nirvana. The Four Noble Truths are as follows.

In Hinduism God is everywhere; in Vedas, in epics, and in Gita; God is there in the sanctity of temples and in the outcry of the souls; God is there in the rumbles of thunders and flickering of lightning; God is there in the minute atoms and in the gigantic stars; and God is there in every heart-beat and in every breath of life. And, whatever may be the progress of science, whatever may be the reasoning power of human mind, God will rule over the heart of humans so long as the fear of death and miseries exist in the world.  Weakness of human mind is the strength of God. The forlorn cry rising from the bottom of the heart will never cease so long as there is weakness. May be that is one of the reasons why Buddhism, the religion that did not entertain God, diminished in India, the land of its origin.

Buddha;… I have deep respect to that great person for his compassion, courage and intelligence. Castes or customs, Gods or priests, nothing had the power to conquer him, nor was he willing to bow his head down in front of any superstitious shadows. And of course, he came to the world not to establish righteousness by destroying anybody, but to save people from their ignorance and selfishness, and help them reach the ultimate goal of life without the interference of a personal God. His glory will be praised forever and his teachings will always be remembered.

Listen to the following powerful and high spirited words of Buddha the Great:

Which is best season to visit Kerela ?