Aswatthama: the Story of a Cruel Revenge

During the terrific silence of that horrible night, they could not hear the footsteps of death. On the eighteenth night of a great war, they were sleeping in the camp, completely tired, and horrified by the nightmare of the dancing torsos in the battlefield. They did not know that the tragedy of a death-dance is going to be debuted in a short while. And when the death knell rang solemnly, there appeared the messenger of death, invoking Kal Bhairav in his soul and evoking him in his body, to destroy everything. He stepped in with vehemence of vengeance. He had lost the consciousness of reasoning. Through the layers of darkness his vindictive eyes, burning like fireballs, pierced in search of the assassins of his beloved father. The destructive sword of Kal Bhairav hunted for the unfortunate heads of the unrighteous warriors who always boasted about their virtues……. It was the immortal Aswatthama, who appeared as the embodiment of death in the Pandavas camp. He converted the camp into a crematorium by brutally killing several warriors including Dhrishtadyumna, the killer of Drona, Shikhandi, the assassin of Bhishma; and thousands of Pandava warriors while they were asleep and in semi-conscious state. His mind reached to the climax of vengeance when he killed the Upapandavas, the five sons of Draupadi, while they were asleep, mistaking them as the Pandava brothers, his ultimate target. Those who tried to run away from the helpless situation were killed by Kripacharya and Kritavarma at the entrance of the camp.

Born in the lap of poverty Aswatthama could not even savour the taste of milk in his childhood. The neighbouring children used to befool him by giving flour water and convincing him that it was milk. Drona was upset about the fate of his dearest child. Drona remembered about his childhood friend Drupada, who was now a king, and approached him expecting some help. But Drupada humiliated Drona saying that they were not of the same status now to become friends; and did not help him. Later Drona was invited to Hastinapur by Kripacharya, and Bhishma appointed him as the Guru of the Pandavas and Kauravas in the Hastinapur. Along with the princes Pandavas and Kauravas, Aswatthama mastered the arts of Dhanurveda under Dronacharya, his father and Guru.

Aswatthama became a master of all weapons and was considered equal to Karna and Arjuna in Dhanurveda. With his physical strength, bravery and knowledge of martial arts, he became a prominent warrior whom nobody could kill. He mastered 64 forms of arts and 18 Vidyas and had become the master of all forms of knowledge.

Arjuna was always Drona’s favourite disciple. Because of this special favour and Arjuna’s exceptional skill in archery, Aswatthama was jealous of Arjuna. In addition to teaching the knowledge of all weapons, Drona had taught the knowledge of invoking Brahmastra to both Arjuna and Aswatthama, but Aswatthama was not taught how to withdraw Brahmastra, may be because he might have felt that for a Brahmin the invoking of Brahmastra would never be necessitated.

The role of Aswatthama was almost insignificant till the death of Drona in the battlefield. In the family issue of Pandavas and Kauravas, Aswatthama had no role to play and was actually a neutral character. But the war demanded participation of everyone, and being loyal to the royal family, Aswatthama joined the side of Kauravas, even though Pandavas were not his enemies. He did not bother to think on which side was the justice. But definitely he had some special attraction to Duryodhana, due to his broadmindedness and appreciation that nobody else possessed. Duryodhana was the son of the elder brother of the royal family and was more eligible for the throne; and that might be the other thought pattern that persuaded Aswatthama to stand on the side of Duryodhana.

When Bhishma fell and was lying on the bed of arrows, waiting for death, Drona became the leader of the Kaurava army. Nobody could beat Drona, and as usual Krishna played a trick. He wrote the script, selected the actors and became the Director himself. Bhima killed an elephant called Aswatthama and the warriors started shouting “Aswatthama is killed”. When Drona heard the noise he enquired Yudhishtira, the man of virtues, who would never tell lie, about the truth. Yudhishtira said, “Aswatthama  hataha” (Aswatthama is killed); and he whispered the word “kunjaraha” (elephant) slowly so that Drona could not hear the last portion! When dharma plays drama, fate will become fatal. The innocent paternity wept with woe. The desperate Drona dropped his arms and started meditating, and Dhristadyumna beheaded the weaponless master.

When Drona was killed by treachery, the furious Aswatthama lost his control. Anger burst out and with broken heart and disturbed mind, Aswatthama took vow to completely eradicate the Pandavas and their lineage. His unabated thirst for revenge started here. …He became another Parashurama vowed to exterminate the oppressive khsatriyas!

It was believed that Aswatthama was a part manifestation of Lord Shiva and it was impossible to kill him or fight him when he became angry. The tragic death of his father made him mad and furious. He released the most dangerous Narayanastra towards the Pandava army. But as per Krishna’s advice, in order to escape from this terrific weapon, the Pandava army dropped their weapons and completely surrendered before it. But the Narayanastra abolished a major portion of the Pandavas army. The fierce war continued and Pandavas suffered heavy loss by the fury of Aswatthama.

And in the last night of the war, after the entire Kaurava warriors were demolished and Duryodhana was waiting for his death after his last fight with Bhima, the three Kaurava survivors gathered under a Banyan tree. They were Aswatthama, Kripacharya and Kritavarma. Aswatthama noticed an owl attacking its enemy crows at night and killing them. He immediately got up and promised the half-dead Duryodhana that he was going to bring the heads of the Pandavas. Ignoring the dharmic advices of Kripacharya and Kritaverma he rushed towards the Pandavas camp. In that night of horror, his merciless sword took the lives of Dhrishtadyumna, his father’s assassin; Shikhandi; the five sons of Draupadi, and thousands of Pandava warriors, who were semi-conscious and helpless. The Pandava brothers were escaped because they were away from the camp during that night, along with Krishna, their savior. 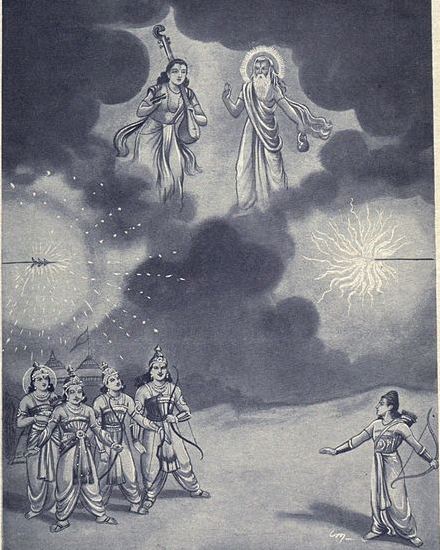 After performing the death dance, Aswatthama returned to Duryodhana, but he was already dead by then. Aswatthama then took shelter in Vyasa’s Ashram. Knowing about the heart-breaking disaster in the next morning, the enraged Pandavas and Krishna chased Aswatthama. Aswatthama invoked Brahmastra in a grass blade and released it against Pandavas. Arjuna too invoked his Brahmastra, as instructed by Krishna. The two divine weapons received from the same Guru, were approaching each other; one from his dearest son and the other from his favourite disciple; aiming at the total destruction of the entire world! Vyasa and Narada, with their yogic powers, stopped the collision of the Brahmastras and asked the warriors to withdraw them. Arjuna could withdraw it, but Aswatthama could not because Drona had not taught him that mantra. The furious Aswatthama directed his Brahmastra towards the womb of Uttara, the pregnant wife of Abhimanyu, and burned down the fetus. Aswatthama’s aim was to end the lineage of Pandavas. It was the greatest sin Aswatthama had done.

Krishna asked Aswatthama to surrender the gem from his forehead and cursed him with agony and anger: “You are a coward and sinful wretch, the slayer of children! The wound caused by the removal of gem from your forehead will never heal and you will suffer from incurable diseases. Without getting any hospitality or accommodation, and completely isolated from mankind and society you will roam in the forest and diverse countries  for 3000 years, emanating pus and blood from your injuries, and even death would not show mercy on you.”

And from there began the endless journey of Aswatthama through the dark ages of Kaliyuga!

…….. Subsequently, Uttara delivered a dead child, and Krishna revived the child. The child was named Parikshit (the Tested One). After Yudhishtira’s rule for 36 years, Parikshit ruled Hastinapur for 27 years. Thus Aswatthama’s efforts to end the lineage of Pandavas did not succeed, whereas he determined his own fate, the fate of humanity!!

Aswatthama was a Maharathi (great warrior) capable of fighting 60,000 warriors at the same time. As per scriptures, Aswatthama is considered as one of the seven Chiranjivis (the long lived beings). He will also become one of the Saptarishis (seven sages) in the 8th Manvanthara. Aswatthama is a mysterious character that is difficult to understand.

Whenever I try to imagine the multifarious images of that strange warrior, my ears become filled with the reverberations of human voices; each voice declares, “I am Aswatthama”,…. “I am Aswatthama”…. Yes… Aswatthama is not dead,…he is still living; not in the scary forests or in lonely deserts or any soothing hospices. He is here everywhere, with his extreme revenge and with heartless cruelty; with the fury of Rudra and wisdom of sage; and with the fire of desires and fearless mind …… he is very much alive in every one of us, with his blessings of immortality converted into curse of humanity!!

His revenge was not for his own self, but for his master, Duryodan, who has given shelter to him. In fact many people had done similar injustices, but might have killed for that. But Author RAMAKRISHNAN said is very true and right, since whatever...

His revenge was not for his own self, but for his master, Duryodan, who has given shelter to him. In fact many people had done similar injustices, but might have killed for that. But Author RAMAKRISHNAN said is very true and right, since whatever the loyalty shown by him was against supersoul and master of all, Lord Shrikrishna.

Why do you read books?

Top reasons for divorce: Part-2 (1657 Hits)
No married couple wants to end up getting divorced. It is not like they have planned for it. They try to put up with their partners for as long as they
How to improve digestive health (1087 Hits)
Due to our modern lifestyle, we feel that digestion related disorders are a common problem. Thus, we neither give importance to them nor seek any help
Top reasons for divorce: Part-1 (962 Hits)
The bond of marriage brings the two people together. Initially, everything may seem okay and both of them slowly start discovering each other in the journey.