In spite of numerous theories and scientific laws, humans have been gazing at the stars and wondering about the mysteries surrounding their existence. The Universe has always been a subject of debate and discussion of the scientific and religious people all over the world. What is this Universe? It includes everything we see, feel, sense and measure, from the microcosm to the macrocosm, such as stars, planets, galaxies, matter in its totality, space, time and light. With millions or billions of stars and galaxies, with empty spaces in between them, the Universe, since its evolution, has been expanding outwards every moment, the galaxies are moving apart, and everything is moving away from everything else.

Several renowned scientists like Albert Einstein, Edwin Hubble and Stephen Hawking have tried to reveal the secrets behind the Universe. There are different ranges of models that attempt to explain the development of the universe. One of the famous theories that has got wide acceptance by the scientific world is the Big-Bang theory.

The Big-Bang theory is an attempt to describe what happened 13.7 billion years ago at the very beginning of the universe. Scientific discoveries have shown beyond doubt that our universe did have a beginning. During and after that crucial moment happened something; that was our Universe. But nothing is known about what was there before that moment, because we cannot reach there; all theories and laws of our science break down. The Big-Bang theory explains us what happened during that moment and after that.

13.7 billion years ago, our universe sprang into existence as a “Singularity”! Singularity means a zone infinitesimally small, extremely hot, and infinite density, within which all energy, matter and space were compressed. We do not know from where this singularity came from and why it appeared. At the beginning this singularity expanded rapidly (termed as the “Big Bang”), became less dense and cooled. From the infinitesimal size and extreme hot state, the universe expanded and cooled for 13.7 billion years and became what it is today.

One misconception about the Big-Bang is that it was a giant explosion; but, experts say that it was not an explosion, but an expansion of the universe, that still continues. It explains us about the development of the universe from a state of infinitesimal size, infinite density, and extreme temperature and into what it is today.

The Story Began in the First Second 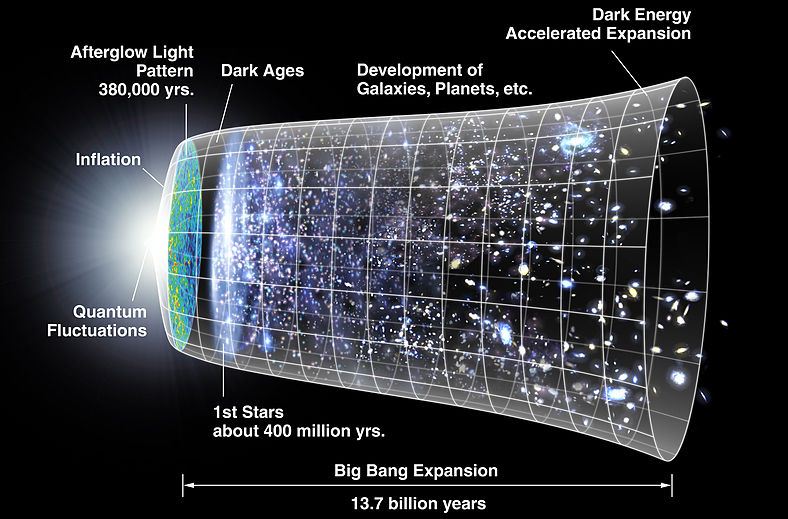 Major phases in the next 13.7 Billion Years

There are some major factors that support the Big Bang theory.

Some Problems and Concerns

In spite of the wide popularity of the Big Bang theory, compared to the other different models, it needs to address several issues and questions of the scientific community. Some of the issues are highlighted below.

In this crucial juncture of cosmogony, where science and philosophy meet with similar ideologies, we should be aware about our fabulous existence. We are living on a beautiful planet, which is rotating itself and encircling a great star gathered together with billions of stars in an amazing galaxy, moving through the space, inside a rapidly expanding universe that began its pace billions of years ago, originated from a miniscule “Singularity” that appeared from naught for unknown reasons.

Science confirms us that our universe has a beginning and everything in it is the manifestation of a Singularity that was beyond the conceptions of time, space and causation. It was a point of infinitesimal size and infinite density, where all laws of science would have broken down. To be honest, we do not know what exactly this singularity was, where it came from and why it appeared; except some mind blogging assumptions that defy our knowledge of physics. Intelligence is the nature of the universe and the nature of all manifestations in the universe. In the beginning there should be the cosmic intelligence that got involved and subsequently evolved itself to become microcosm and macrocosm. If so,….. was Intelligence the First Cause?!

superb article...thank u for posting it.
may i know are u a physics professor?

Thank you for your compliments!
I am an engineer by profession; but, curious about the mysteries of the universe.

A very informative article. It is said that the big bang keeps happening because after expansion the universe in a reverse manner starts contracting back to Singular state. and all events and living beings keep reappearing. No proof more of...

A very informative article. It is said that the big bang keeps happening because after expansion the universe in a reverse manner starts contracting back to Singular state. and all events and living beings keep reappearing. No proof more of philosophy. But a good article.

Many thanks for your nice comment and the new piece of information.

Top reasons for divorce: Part-2 (886 Hits)
No married couple wants to end up getting divorced. It is not like they have planned for it. They try to put up with their partners for as long as they
How to improve digestive health (584 Hits)
Due to our modern lifestyle, we feel that digestion related disorders are a common problem. Thus, we neither give importance to them nor seek any help
Top reasons for divorce: Part-1 (706 Hits)
The bond of marriage brings the two people together. Initially, everything may seem okay and both of them slowly start discovering each other in the journey.

Do aliens/ extraterrestrial life exists?
We are in a modern world with cyber technologies discovering new planets, new space objects with our state of art high performance telescopes. We
Should Space Colonization be attempted?
Introduction:  The term space exploration associates many imaginable as well as unimaginable ways of thinking deeply into an area of the unknown. Space
Is there intelligent life in outer space?
Introduction: In the eyes of an ancient era, Hindu community across large Indian sub-continent considered lords as the epicenter of everything that exists
The Fascinating Planets
A study of the planets is always an interesting journey into the world of outer space, millions of kilometers from our earth. We were always told
Apophis - Doomsday Asteroid
If we look at the history of Earth, we will find out that from the beginning of time to till now, Earth has been haunted by innumerable prophecies and