A Journey Through The Navagraha Temples of Kumbakonam

Temple Gopuras are the distinct fingerprints of Tamil Nadu towns. But if it’s the case of Kumbakonam, it’s bit different. Kumbakonam is a city of temples! A vast town with 60 temples and temple gopuras built by Chola dynasty! So let us start from this great city of 60 temples, a journey of 60 kms to reach Navagraha temples (a cluster of 9 temples) of Kumbakonam.

Before we start pilgrimage

Before we start pilgrimage let us know what Navagraha temples really implies. As per Hindu astrology, each man and his thoughts are controlled by planets (grahas). In Navagraha temples, these planets and idols symbolizing them are worshipped. Surya (Sun) is worshipped for soul and Chandra (moon) for mind of a human being. Shukra (venus) for Wealth, Bhudan (mercury) influences word and Vyazham/Guru (Jupiter) for wisdom and prosperity, and thus it go on. Thus each graha influences man in its own distinct ways and to please them, man offers worship. In most Indian temples, Navagraha is found together. In only rare cases, they are found as a cluster and worshipped separately. Kumbakonam surely deserves a sacred position in the religious map of India. In majority of these temples, Lord Siva is the main deity.

From Thanjavur it’s one hour journey to Kumbakonam. Whole throughout the journey you can observe the remains of great chola kingdom and its wonderful piece of art. Temples are spread here and there on the way! On the way there is a famous temple at Thiruvayyar. Samadhi of Great Thyagaraja Swamikal took place in this village. Every year a music festival is organized in this place and classical singers from all over the world do participate. After the death of Kunnakkudi Vaidyanatha Bhagavathar, the whole function is organized by the family of G. K. Mooppanar.

Let us begin with sun temple. If you want to visit the 9 temples in their order it may take at least 3 days. In all these temples, after noon worship, temple doors will be open only after 4 pm. Shani temple of Thirunellaar is at the distant place, 60 kms from Kumbakonam. Otherwise it takes 1 or 2 days. So, it’s your preference to visit Navagraha temples in order or not.

A street with the fragrance of lotus in the early morning! The village name is also the same – Sooriyanar. The street ends at the big Gopuram of Surya Temple. If you reach early at this temple assuming that it will open in the early morning, then you are wrong. Worships start only at 7 am.
Of all offerings to temple, lotus flowers have first preference, then a kit of 10 coconuts and 10 colour flowers. It’s for 9 planets and Lord Ganapati, thus total 10. The main priest is normally an aged person and he reaches the temple at sharp 7 am to open the main doors. In the calm village, it’s really a pleasant feeling to pray Sun God if the place is not crowded.

Sun’s deity is placed above steps facing the main door. Sun is the centre of solar system. Similar to that assumption, all other planets are placed around his idol as a replica of small temples. Jupiter faces Sun. In the cluster of Navagraha temples of Kumbakonam, 9 planets are worshipped only in Sooriyanar. In the rest 8 temples, only that particular ‘graham’ is worshipped.

There is a separate temple for Theertha Vinayakar.  As per belief, when Brahma cursed Navagrahas, they achieved ‘Moksha’ praying to Theertha Vinayakar in Sooriyanar. It may be true or not, but the temple atmosphere makes us believe those facts! The temple built in 12th century is its evidence. As stated in one of the inscriptions found in the temple, Sooriyanar temple was built during the reign of Kulottunga Choladeva (AD 1060-1118).

Kanjanur temple is not too away from Sooriyanar. The temple is so beautiful with mural paintings. One should pray to Viswanatha Swamy and Karpakambal first. Assuming Sukran, "Agniswarar" or Shiva is worshipped here. It’s believed that Ganapathy idol of this temple is Swayambhu (self-manifested). Sukra (Venus) is located inside Siva’s stomach, according to Saivite belief. This temple built by Cholas has been renovated by kings of Vijayanagar and its highlight is 5-tier Gopuram. 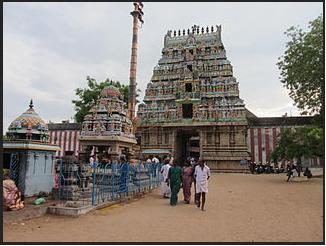 This temple is situated in the banks of Kaveri River, about 7 kilometers away from Kumbakonam. Of the 9 temples in the group, Thirunageswaram is the biggest one. Its Goparas and pillars are gigantic and the best examples of the art of Cholas. It’s the place of union of three goddesses – Lakshmi of prosperity, Saraswathy of education and Parvathy of strength. After praying Naganatha Swamy (Siva) devotees go to south west corner of the temple where Rahu (north or ascending lunar node) is worshipped. It’s believed that during ‘Milk abhishekam’ of Rahu conducted at Rahu Kaalam, Rahu’s idol changes its colour to blue. The temple is bit crowded comparing the first two.

Shrines of goddess Parvathi is also present in the campus of two forms – Giri Gujambigai and Pirayani Amman. It’s believed that this temple has been made by Aditya Chola during 10th century AD. Later rulers have renovated it many times and it’s another masterpiece of Chola Kings. This temple’s name has been mentioned in Saiva canon too, as one among the 276 Siva temples and has religious significance a lot. 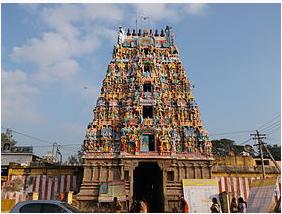 According to beliefs, as per instructions given by the emperor the temple was built by his chief minister, Amritaharan. But once it was completed, Amritaharan hesitated to share the temple and its divinity with subjects. Emperor killed his minister and opened the temple for people. To get to rid of the sin, emperor prayed to Apatsahayesvarar, Lord Siva. Apatsahayesvarar is the main deity of this temple.

According to customs one should circumambulate the temple 24 times. 24 lambs will be lighted. There is no separate shrine for Guru (Jupiter). Once you complete these four temples, it will be noon and in the evening you can visit four more.

Vaitheeswaran Kovil (temple) to begin with, in the evening

Pillars of this temple quite resemble with that of Rameswaram.  The temple is crowded too. Vaitheeswaran has a few more interesting things. This place is famous for ‘Nadi astrology’. If non-Tamilians visit this place, they will surely love to know about their future using this palm leaf astrology. It’s believed that those palm leaves telling future were written by Saint Agasthya. But majority of them were destroyed during British rule and it’s not possible for all people to get their palm leaves. According to Nadi astrology, fate of every man has been written centuries ago and if you are able to find your palm leaf from the collection, you can know everything about your past and future. But it’s to be noted that you can find many fake astrologers with fake palm leaves too. Such fake astrologers are always found in the temple premises searching for their next victim. 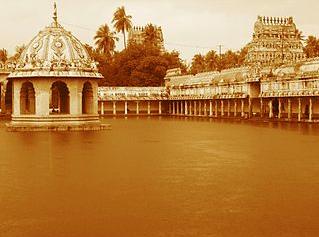 According to mythology, Mars (Mangal) got leprosy and he was cured by Vaidhyanathaswamy in this place. It’s also believed that after killing Surapadman, injured Subramaniya (Muruga) was cured by Vaitheeswaran (Lord Siva) in this place. Cremated place of Jadayu of Ramayana also took place here. So, this temple is very much linked to Hindu mythology and presiding deity Lord Siva is believed to be the healer of all diseases.

Kumbakonam is famous not only for temples and lamps, but for educational institutions too. This town is known as ‘Cambridge of Tamil Nadu’. Two people from Kumbakonam are very popular. The first person is a mathematical genius whom we know as Ramanujan. The second person owns a celebrity status. He is none other than super star of yesterdays – M.G. Ramachandran, the shining star of ADMK party. Why not! Budha (Mercury) is the influential planet of education and learning who is worshipped in Thiruvenkadu Siva temple. 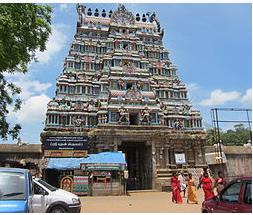 Agora Murthi (Siva) is the main deity of this temple and Budha is placed in a separate shrine next near to Ambal temple. It’s believed that among all planets, Mercury is the most intelligent one and people with ‘Budha dosham’ offer green silk and pulses to pray to Mercury.

Siva in the form ‘Naganatha Swamy’ is the main deity of the temple while Ketu (south or descending lunar node), a shadow planet is the presiding deity. Pumpuhar was the centre vein of the reign of Chola Kigdom. This Ketu temple at the sea shore is near to their central hub. It’s believed that there is an underground tunnel connecting Thanjavur Brahadeeswara and this temple.

Ketu’s idol is the highlight of this temple. Idol of Ketu with head is rarest of rarest and found in only a few temples. Head resembles snake and body resembles ‘Asura’. 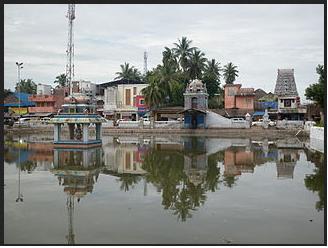 While we circumambulate the 9 temples of this group, it appears as if Thirunellar is like an isolated island separated from the rest. This temple is located in Pondicherry. If you keep a tight time fixture, you can visit this temple too, before it closes in the evening. The presiding deity of Thirunellar is Dharbaranyeswarar - Lord Siva. Thirunellar quite resembles a pilgrim place. You can see lot of pilgrims and saints roaming in the streets. Ticket entry rates are also different.

If the next day is Saturday then the place will be crowded and whole rooms will be filled. Friday evening, temples close earlier. People wake up early in the mornings of Saturdays for Shani Pooja (Saturn). Every day, 4 abhishekams will be done to Lord Shani. Shani/Saturn is regarded as the time for bad experiences and experiments and in three phases, each one will have 7.5 years of this bad period. But through prayers and offerings to please Shani, the severity of this period and its experiments can be lessened. That’s the reason why people come to this temple in folk in this belief.

Let us end our journey with Moon temple

Moon temple is on the way of the return journey to Thanjavur. This temple doesn’t hold the ancient fragrance of Sooriyanar, rush of Shaneeswar or gigantic size of Shani temple. A small gopura at the centre of an agricultural field! In most cases, pilgrims start their Navagraha journey with Thingallur. The place name itself suggests the Moon Temple (Thingal means Moon). Thingallur Kailasanthar temple is the closest to Thanjavur.

When you complete the pilgrim journey through these 9 temples of Kumbakonam, you may get a feeling of eternal happiness and satisfaction. Also a strange feeling that you have seen all those 9 planets near!

Hot Hits: 4625
I am a house wife who is interested in reading books, writing poems and experimenting new recipes. I always love to search web to explore new findings and interesting pieces of knowledge. I am a well-social person who loves to be in the midst of friends and try myself to be engaged in any form of activity as I believe 'Human life is the most precious thing that God has gifted us, with time being the most essential content of it'. So I desire to live each and every moment of life with full happiness and satisfaction.