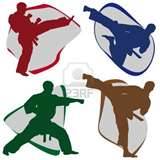 It is a famous art and said that it is practiced in the whole world. Martial art is learnt and done for self defense and to be fit physically. Now it is also treated as a competition and a part of games. It is said that the martial art are mostly originated in Asia. This art is practiced with weapon or without weapon. There are many types of martial arts.

History of this art

It is an ancient art. Kung fu is supposed as an oldest art. It was originated from India but more than two thousands ago it was seen in china. Now Martial arts are very much popular in the whole world. In many countries weapons are banned for this art. China, Japan, United state Europe are mostly famous for this art and played in different form like Karate, Kung fu, Sumo, Judo etc. mainly it is practiced solely.

Striking and grappling are the main techniques in this art. Depending on various styles and techniques it may be classified in various types.

In striking technique the hands, elbows, feet, and head are blow and karate, kung fu are most popular martial arts fall in this category. In other hand techniques of throwing, locking and wrestling fall in grappling category. Other popular grappling techniques are jujutsu, judo and aikido.
Bodies are used in judo type but in kung fu weapon is a essential part when competitors start learning. Sword or staff may be used as weapon made of wood or metal.

Functionally it may be divided into traditional or non traditional way. In traditional form mainly spiritual development, discipline is taught to learners.
Benefits of learning this art: It develops the knowledge of discipline, self confidence. It is taught to defend self as well as others, but not to dominate others.

Spiritual development is also an advantage. In other hand every body can develop fitness physically and mentally. Many martial arts are influences philosophically and religiously. Buddhism and Daoism use it to develop self mastery and self realization. So this art needs some breathing exercise and physical exercise to be fit bodies and minds.

So this art is not for fighting but for living. The masters say that this should not be used to dominate others.

Why belts are used in this training?

White and colored belts are used to mention rank and improvement of trainees. White belt means a fresh. Then the trainees have to pass different label and finally get black belt status. So the belts are the indication of degree also.

KARATE: It is practiced wearing white pant and a loose jacket with a belt. Mainly it is taught to protect self and others. It needs a quick movement and punches, strikes, kicks, blocks etc are used to be a successful karetian.

KUNG FU: In Chinese word this means skill and ability of work. It is also an opened hand art and uses punches, strikes, kicks etc like karate. It is said that it is seen in China first and an old art. Dress is almost same and it is a most popular art in whole world.

JUJUTSU: It is a Japanese art and so called an art of gentleness. In this art one holds another and chokes throws, trips, locks and also strikes. It protects one quickly from any attacker.

JUDO: It is a further development of jujutsu art . It is also learnt for self defense. Grappling and throwing are the main two techniques of this art. Judo is a popular game in many sports event like Olympic also.

AIKIDO: It is mostly similar like Judo. Different styles and techniques are followed during practice.

Some martial arts are used as martial sports and organized in different events in the form of competition. Kickboxing, Sumo, Kendo are some examples of martial sports.

Kickboxing is now very much popular now as it is taken in many international sports and gets a great coverage. It is said that this art was first shown in Thailand. Gloves, helmet and pads are used to play this game.

Sumo is another popular game in Japan. It is played with in a ring and main object is to out the opponent from the ring. Slapping, Throwing, grappling, pushing and pulling techniques are followed during play.

In film: Bruce Lee was a great actor and follower of this art in movie. He presented many popular cinemas and gave a great popularity through out the world. After that China and Japan produced many films to show this art and now it becomes popular every where.

Hot Hits: 1367
I AM ALWAYS A GOOD LEARNER. I LIKE TO HELP MY CHILDS IN THEIR STUDIES.

Do you think Arnab Goswami is a pest and should be banished from Times Now?

Top reasons for divorce: Part-2 (1661 Hits)
No married couple wants to end up getting divorced. It is not like they have planned for it. They try to put up with their partners for as long as they
How to improve digestive health (1099 Hits)
Due to our modern lifestyle, we feel that digestion related disorders are a common problem. Thus, we neither give importance to them nor seek any help
Top reasons for divorce: Part-1 (965 Hits)
The bond of marriage brings the two people together. Initially, everything may seem okay and both of them slowly start discovering each other in the journey.

How to earn money while having fun with music and dance
Music and dance as your career  Degrees and certificates are important for a career in performing art but more than degrees the willingness to perform
'Special 26' The Movie Where Story is the Hero
Good Hindi films do not come in a flood. They come like a one time phenomenon and usually there is a fairly large interval between two good films. The
The dance cum drama- Kuchipudi dance
India is a country of rich tradition of dance and music that has prevailed since time immemorial. The dance Kuchipudi that originated in Andhra Pradesh
Indian Music, different Manifestations
The Genesis of Indian Music The origin of Indian music dates back to Vedic period. Vedas,the most sacred and the oldest scriptures of Hindus and Hinduism
Theater in India
One of the meanings of the word Theatre  or Theater (American spelling.) applies to a  building or outdoor area where in plays and other dramatic