Media- an important part of Society. 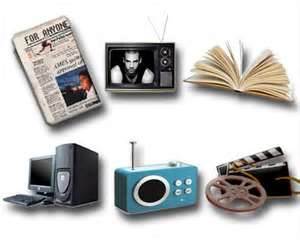 What is media? It means of communication which help to communicate with a large number of people at a time. Now a days it plays an important role to aware and know about something via Radio, television, newspaper, magazines, internet, etc.Today we can not neglect these as it has become a part of our life.

The activities of print media have changed and it has established its importance to society. It has been continuing from early life. First wet clay or wax was used to communicate about any transaction or to keep any documents. Later in china it was developed in the field of printing to a large extent. They first invented paper to print. But one German scientist Sir Johan Gutenberg first helped to print the holy Bible in the middle of fifteenth century.
Then printing machine and type writer have come. Now computer has changed and developed its features. Newspaper, magazines or any type of printing are done through computer today.

Internet and television are the main popular media to communicate in present society. Internet is the latest invention. Television is widely used media now a day as it gets a large number of viewers at a time. It helps to know about any current events or situation of society and country, the weather condition may national and international news. It has a great impact to a large number of people. Now cable and satellites techniques have also improved. It breaks the boundaries of national and international cultures. Now electronic media is updated with the advanced technology which is internet. Within a second we are getting any information about the world by clicking our mouse.

Economic side of media

A large number of people are involved with this. Many types of equipment are used here. Computer, camera, mobile, transmitters, paper and many other components are used. So a large amount of our economy is also involved. It also helps many young and reducing unemployment problems. All manufacturing companies are also using these media to promote their products in the markets through advertising. So in many ways it helps to improve our economic condition of our Country.

Media is playing an important role in all democratic countries to give any messages to public and also gets public opinions. Continuously it is working to give any information through discussion, speeches or news.

It also highlights political opinions or views of any party. These informations are helping continuously to public to take any decisions about anything. So it has a great effect on the people in a democratic country. Not only television and internet, but cinema also plays an important role. It also gives many positive messages to public .It highlights the culture of any religion and people of various areas.

Freedom and rights of media:

We all know that before independence there was an act passed by British Government. It was used to ban any newspaper and book or any printing hand notes which worked and said against them. After independence our country made our constitution and passed an act named freedom of press. It gives the freedom of expression and speech related to the common people. Censorship may be done when any media or person are working against public interest. So in democracy we can not do anything according to our wish.

Media should have some duties and responsibilities. Now right to information act has also been passed. It helps the citizens to get any information and progress of any department.

Society needs fair, society needs truth, and society needs peace. Media can help in many ways to improve our society. India is a good example of unity in diversity. We are continuously aware to maintain it.

Hot Hits: 1839
I AM ALWAYS A GOOD LEARNER. I LIKE TO HELP MY CHILDS IN THEIR STUDIES.

Are you happy with your mobile phone?

The handphone you are using are you happy with is?

Twist and turns of life
It was the time internet had started peeping in our lives, I was from well cultured family.  Well cultured and well to do family from Dombivali, so,
Karma - a theory of action and reaction !
What is Destiny or Karma ? One wonders whether Destiny or Karma is a concept that evolved and grew only in India and particularly unique to Hinduism or
The Life And Times Of M . F. Hussain
M F Hussain is probably one of the most well- known Modern Indian Painters , also part of the Progressive Artistes Group of Bombay. MF Hussain with all
English Poems
Wall- Wall built between us That never breaks and never shakes Wall that not to protect us But to break Difference between us Makes the wall strong The
Ganesh Chaturthi - Celebration or Noise Pollution
Ganesh Chaurthi is observed to celebrate the birthday of the Hindu Lord Ganesh. This festival is celebrated throughout India but holds a special place