Christ the Redeemer, the gigantic statue of Jesus Christ, welcomes you with outstretched arms at the famous Rio de Janeiro, on the 700 meter tall summit of the Mountain Corcovado, in the Tijuca National Park of Brazil. This largest Art-Deco sculpture in the world, made of reinforced concrete and soap stone tiles, is 30 metres tall and stands on a massive pedestal of 8 metres high, with arms stretching at 28 metres span. This sculptural marvel, declared as one of the New 7 Wonders of the World, in the year 2007, stands as a symbol of peace and the icon of Rio de Janeiro and Brazil.

Attracted by the magnificent beauty of the Mountain Corcovado, a suggestion for installing a Christian monument on its summit was made by the Vincentian priest Pedro Maria Boss, in the 1850s, to honor Princess Isabel; but the time was not favorable and the idea could not be accomplished. In 1889 Brazil became republic, church and state became separated, and the original idea became overlooked. After several years, in 1920, the proposal was again raised by the Catholic organizations of Rio de Janeiro, and by collecting signatures and raising funds, this ambitious project became fruitful. The foundation stone of this landmark was made on April 4, 1922 to commemorate 100th anniversary of the independence of Brazil.

Heitor da Silva Costa, the Brazilian architect, was the original designer of the statue and engineer in charge of the construction and Paul Landowski of France, was the sculptor. Gheorghe Leonida, the Romanian sculptor, got the credit for portraying the face of Jesus Christ on the statue.  It took nine years to complete the statue weighing 700 tons and costing more than USD 250,000. Parts of the statue were created in France, the disassembled parts were delivered to Brazil and transported to the top of the mountain by rail. Finally, after completion of the installation, the statue of Christ the Redeemer was dedicated to the world on the 12th day of October, 1931.

Being exposed to lightning strikes and erosion, the statue needed renovation and repair works periodically. As part of renovation in 2003, panoramic elevators and escalators were built to facilitate easy access for the visitors to the platform surrounding the statue. Lightning stuck on the statue in 2008 causing some damages to its fingers and face. In a major restoration work in 2010, the soap stone layers were replaced, internal structure strengthened, lightning rods and new lighting fixtures were installed for better illumination and the statue was made water-proof.

Christ the Redeemer statue is the first attraction of more than two million tourists who visit Brazil every year. It is the most photographed tourist attraction of the country. Standing on the 700 meter high majestic Corcovado Mountain, one can enjoy the spectacular views of Rio de Janeiro, the Guanabara Bay, Sugarloaf Mountain, Tijuca National Park, Ipanema Beach, Copacabana Beach, and the Atlantic Ocean. Feeling the indefinable moments of tranquility and enjoying the breathtaking beauty of surrounding mountains and ocean, we will realize why Christ the Redeemer has become one of the New Seven Wonders of the World.

For adventurous people, there are challenging options of hiking trails. The hiking trail which begins in the Parque Lage of the Botanical Gardens through Tijuca National Park for about two hours will be an amazing experience, enjoying the thrilling view of three waterfalls and animals like Capuchin monkeys along the way.

In addition to hiking, one can enjoy hang gliding and can fly without wings over the beautiful city of Rio de Janeiro and the picturesque beaches surrounded by the rain forest of Atlantic.

Corcovado Train station in Rua Cosme Velho is the base station from where one can reach to the top of the Mountain Corcovado using cog train, which is the fastest route available to the site. While travelling to this landmark in the historical train, the beauty of the picturesque nature of Brazil will intoxicate you with a mesmerizing charisma that will make it impossible for you to stay away from the window even for a moment.

Corcovado Railway station is completely renovated and has been provided with modern facilities and comfortable atmosphere, with new platform, tourist stores, an auditorium and VIP rooms. The most attractive feature is the Mountain Train Cultural Center with exhibition, which displays the entire history of the Corcovado Railroad and the wonderful monument.

When you reach the end station at the top of the Corcovado Mountain, there are 220 steps inviting you to climb to the top to reach the base of the statue. But now the visitors need not trouble by climbing through all these steps. The 3 panoramic elevators and 4 escalators constructed in the year 2003 provide easy access and convenience to the tourists to reach the monument. In the base of the statue, there is a chapel, to accommodate about 150 people, where baptisms and weddings are held. 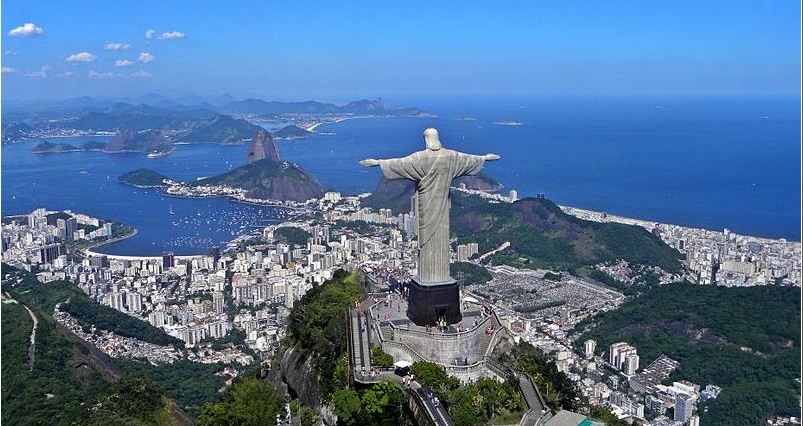 September and October are the best times of the year to visit Christ the Redeemer. Temperature and humidity will be lower during this period. Exploration will be comfortable in the lower temperatures.

Morning is the best time for taking the photographs of the statue. The statue will be lit by the sun light and your eyes will be away from the sun. At the same time you have to face the sun if you want to shoot the city and harbor.

For better sightseeing and photography of the surroundings, late afternoon is ideal. Light will be spread over the city, and you can take better pictures of the harbor, the beautiful Rio and the mesmerizing Sugar Loaf Mountain. If you want the best images of both the monument and the surroundings, you can spend there a day, from morning through afternoon.

How to Reach there

The cog train from Corcovado Train station will take you through the world’s largest urban forest Tijuca National Park, and will reach the top of the Corcovado Mountain in 20 minutes. Both the train ticket and admission ticket to the site can be purchased from the railway station. The cog railway was originally built to carry the parts of the statue and construction materials to the site.

Instead of cog train, you can also reach there through mountain roads by car, van or bus, but may not enjoy the thrilling experience of travelling by the cog train. During holiday seasons, there may be traffic congestion on the steep routes and hence the train journey will be more comfortable.

Standing on the top of the world, as symbolized by the huge pedestal, with arms stretched to the sides giving the notion of a cross, the miraculous statue of Christ the Redeemer designed by Heitor da Silva Costa, declares to the whole world that everything in this world is in God’s hands. He greets the world from the sky-high and showers his blessings filled with compassion. There are a great many wonders in the world that create awesome phantasms in human minds, but once you visit this colossus statue of Christ the Redeemer at Rio, you will feel  deep within your heart, the great truth,  that wonders never end!

Do you think having a bf/gf is a necessity.

Top reasons for divorce: Part-2 (3254 Hits)
No married couple wants to end up getting divorced. It is not like they have planned for it. They try to put up with their partners for as long as they
How to improve digestive health (2315 Hits)
Due to our modern lifestyle, we feel that digestion related disorders are a common problem. Thus, we neither give importance to them nor seek any help
Top reasons for divorce: Part-1 (1854 Hits)
The bond of marriage brings the two people together. Initially, everything may seem okay and both of them slowly start discovering each other in the journey.

Famous lakes in India
Top famous lakes in India India is famous for its beautiful lakes and rivers dispersed from east to west and north to south. Indian lakes can
Bu Tinah Island : The new Wonder of the World?
BU TINAH ISLAND, a place where nature is still undisturbed, an island where one can find animals which are near to extinction and a place with wonders
10 Activities while visiting Maldives
Maldives is an enchanting island paradise comprising of more than 1190 small islands. Out of these only 200 are inhabited by humans. Maldives has a rich
Koh Lan - The Coral Island
Koh Lan is famous coral island in Thailand. It is 7 kms away from Pattaya City. Koh Lan is very attractive tourist spot. Every year millions of tourists
A sailor’s life is a hard and rough one; and it is dangerous
The sailor A sailor is one who knows how to work in a sailing ship nowadays there are not sailing ships left, for their place has been taken by steam