Karma - a theory of action and reaction !

What is Destiny or Karma ?

One wonders whether Destiny or Karma is a concept that evolved and grew only in India and particularly unique to Hinduism or whether it was also known and believed by people elsewhere in the world. But going by all accounts we come to know that Karma is a Sanskrit word, which means action. Chinese culture which is almost as old as that of Hinduism, too has something similar called Ming Yun, which means fate or destiny! Although, it is possible that other older religious communities too might have some similar concepts within their own belief.

Karma as Hindus and Indians perceive it, also means the consequences of one's actions or reactions to one’s own action. When someone refers to Karma it means they are speaking about cause and effect. The general belief is that you get what you give – a good action begets a good response and a bad action can get a bad response or a negative response. This may concern both direct and indirect actions taken by an individual. So, in effect our elders were particular that people are aware of their actions, its consequences and therefore be careful and thoughtful before uttering a word or take any action. It is the same as Physical laws of action and reaction. 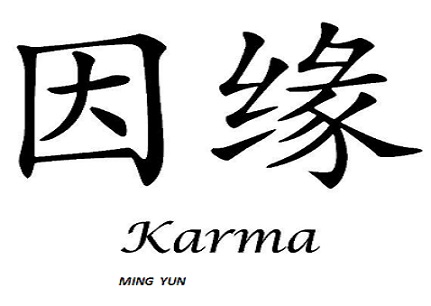 What are its pros and cons?

I came across this very interesting quote on destiny "The best years of your life are the ones that come wherein you realise and decide that your problems are your own. You do not blame them on your mother, your neighbor, the ecology, or the president. You realize that you control your own destiny” – So when life itself is a big question, instead of pondering and wasting away precious seconds, minutes and days, is it not better to live life as it presents itself? Take responsibility for your actions and face the consequences!

Life has never been easy for most of us and having a firm faith in either god or Karma gives us strength since when the worst things happen to us, instead of breaking down or giving up altogether, at least one can say it is Karma that we have earned (not just through our actions but our forefathers and ancestors too) so it has to be endured and move on. This also makes us immune to a certain extent. Hindu philosophy of Karma burdens you with your ancestors' actions too - both positive and negative.. Old sins have long shadows!

We should remember that Karma is not religious but a philosophical way of looking at life and its many nuances without being judgmental. You accept things, both good or bad without questioning the outcome with a firm belief that this is what I get out of life. But does this attitude and too much belief in Karma kill ambition and creativity? It does, when people become totally Karma oriented and do not question or analyse even when things go wrong. Even when there is a remedial measure they fail to try it out because of this blind belief in their Destiny, Karma or Fate!

Most situations in our life has a solution if we care to look for one, all that is needed is some soul searching. A person who believes in Karma often believes that he or she cannot change what he or she is destined to get out of life. This is a very fatalistic belief that can make you morose and a pain to live with at times. I have known many cases where people lose interest in their immediate surroundings and do things like a robot because they believe that no matter what they do, their destiny or Karma overtakes them, so what is the point? They also begin to care less and lesser for their family and their surroundings. They fail to realise or feel guilty of the fact that their actions make people around them unhappy.

I love these words from Bhagvad Gita which is a store house of wisdom and superior knowledge - " One does not attain freedom from the bondage of Karma by merely abstaining from work. No one attains perfection by merely giving up work. Because no one can remain without performing any action even for a moment. Everyone is driven to action, many a times without realising by the Gunas ( elements ) of nature. Perform your obligatory duty, because action is indeed better than inaction. Even the maintenance of your body would not be possible by inaction. In every action in life we acquire some karma or the other -either good or bad depending on our action or reaction!

So what does fate mean ? Is it the same a Karma or different ?

Karma is action and reaction but fate is different in that it cannot be changed. I would call it the end result of one's own Karma. According to a wise man – “I can control my destiny, but not my fate. Destiny means there are opportunities to turn right or left, but fate is a one-way street. I believe we all have the choice as to whether we fulfill our destiny, but our fate is sealed“.

Some even go to the extent of saying that fate is predetermined, so can never be changed, if indeed that is so, why go through the motion of living? I wonder if it has to be that definite? sealed and cannot be changed?

Our life is made of the past ,present and the future but past and the present often merge with one another. If we realise that often past plays an important role in our present dealings and our present is going to play an important role in our future days, it would be a starting point to work towards the future by taking care of the present. Once we understand our needs and limitations it is not difficult to shape our destiny. Yet the same time mystery of the unknown future is what makes life interesting and worth living. So, it is better not to have a fatalistic attitude about everything in life.

Most people tend to build a barrier against depressions and distressing just by trying to divert their mind and trying not to think about them. The theory of Karma deals with such a situation. It cushions a human being against their mental agony and prepares individuals to face such eventualities. As long as people are happy in their beliefs and it gives them happiness , strength and peace of mind nothing else matters. To a large extent we can control our life happenings but with all that we are unable to foresee and prevent certain matters which may ruin or have a large impact on our lives and that’s when Karma or the belief in destiny takes over.

In fact, we create our own little world as we go along. If we create a good cause then we also create a good effect and if we create a bad cause then we will create a bad effect… A cause consists of one’s thoughts, emotions and action. So, if you are just focusing on action or hard work and not on right thoughts and emotions, you are putting in one third of your effort and hence you are getting only one third of results. That does not mean you are failing here but you are putting all your effort on one single factor, which is giving a limited result or output. In order to succeed you need to have the right kind of emotions, right thoughts and the right effort.

Fate, also cannot in anyway change physical aspects of your life. For instance fate cannot decide how much money you can hope to have? Since everything in this world is a matter of cause and effect, fate tries to change the cause and try to bring good or bad fortune into your life. If you are steady and consistent and have developed a great will power , nothing can change the course of your thoughts, action and emotions or let fatalistic thoughts have any powers over you.

To conclude we can easily defeat or change our fate, Karma or destiny using our willpower and strength of character.

Hot Hits: 767
I love books and reading. My other hobbies include gardening, travel, music and cooking ...

There is lot f meaning in Karma. Really our karma begins with thoughts. You act the way you think and you action gives results. In a way, our mind is a Kalp Vriksha under which we get what we think.

Are you ever bought anything for your Parents ?

Top reasons for divorce: Part-2 (1660 Hits)
No married couple wants to end up getting divorced. It is not like they have planned for it. They try to put up with their partners for as long as they
How to improve digestive health (1099 Hits)
Due to our modern lifestyle, we feel that digestion related disorders are a common problem. Thus, we neither give importance to them nor seek any help
Top reasons for divorce: Part-1 (965 Hits)
The bond of marriage brings the two people together. Initially, everything may seem okay and both of them slowly start discovering each other in the journey.

Twist and turns of life
It was the time internet had started peeping in our lives, I was from well cultured family.  Well cultured and well to do family from Dombivali, so,
The Life And Times Of M . F. Hussain
M F Hussain is probably one of the most well- known Modern Indian Painters , also part of the Progressive Artistes Group of Bombay. MF Hussain with all
4 Ways to Write a Unique Write-Up to avoid Plagiarism
To produce a unique write-up we must remember that there are four important factors of writing which basically do not only possess a strong independent
English Poems
Wall- Wall built between us That never breaks and never shakes Wall that not to protect us But to break Difference between us Makes the wall strong The
Ganesh Chaturthi - Celebration or Noise Pollution
Ganesh Chaurthi is observed to celebrate the birthday of the Hindu Lord Ganesh. This festival is celebrated throughout India but holds a special place