The Great Uprising Revolt of 1857

It was the time when the oppression of the Britishers had reached its limit. Everywhere there was treachery and ingenuity. Almost everyone was suffering at the cost of the British rule. There was a need for an opposition of the British dictatorship. It was becoming clear that the British had not come to India to develop it in any terms rather they have come to loot and to make India in the worst state of degradation. The most sufferers were the one who were serving the very British troop. Thus began the Revolt of 1857 mainly led by the sepoys in the army.  The first mass revolt of its own kind, the Revolt of 1857 has set up its mark in the History of Modern India. Though the revolt was not successful in its attempts in some perspective and independence was gained almost 90 years later, yet this revolt was able to rekindle amongst the people of India the feeling of freeing themselves from the impeachment of the British rule. 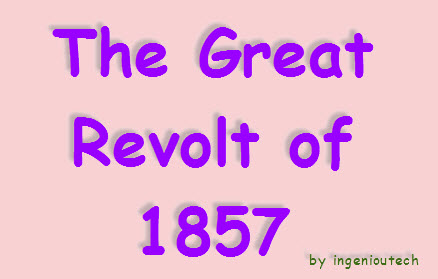 The beginning of the Revolt happened all of a sudden when a band of soldiers on 11th May, 1857 marched towards the Red Fort, New Delhi, captured Delhi and convinced Bahadur Shah II to be the Emperor of India (Hindustan).  They then approached the leaders at various areas to be a part of the revolt.  The revolt was most widespread in Northern, Western and Central India. Nana Saheb from Kanpur, Khan Bahadur from Barailey, Kunwar Singh from Bihar and Rani Laxmibai from Jhansi were approached to lead from their respective areas and the impact of the revolt was mainly seen in these areas. Nearly 2.32 lacs soldiers opted out of the British army without caring about their economic stability and joined the revolt.

The reasons that led to the Revolt.....

There were several reasons because of which the revolt gained its momentum. The most significant was the introduction of the Enfield rifle in the army. The cartridges of the new rifle had to be bitten off before loading and the greased was supposed to be made of beef and pig fat. This hurt the sentiments of both the Hindu as well as the Muslim soldiers. As a result of which they refused to use the rifle. The Britishers reacted by disbanding the whole army. Further a brave soldier by the name of Mangal Pandey came up and killed a British officer were he could not further tolerate the unethical behavior of the Britishers.

Similarly, some soldiers refused to go Burma by crossing the sea as crossing the sea meant a loss of caste according to the Hindu rituals prevailing at that time. When the soldiers denied following the orders, the whole army was disbanded and the opposers were hanged.

Those who obliged to the British’s orders found themselves outcasted from their own people. One such example can be illustrated when a band of army was sent for the Afghan War where they would eat whatever food was offered to them. When they came back to their own society, the people refused to accept them as they sensed that the soldiers would not have followed their caste rituals.

The Hinduism also seemed to be at stake since it is believed that the Britishers conspired to convert the people of India into Christianity. The missionaries were openly permitted to preach Christianity where they would defame other religion and propagate their own.

The inequality shown by the Britishers in terms of wages and promotion also seemed to be one of the causes. The soldiers were dissatisfied and understood that no matter how dedicated they were for the Britishers, they would never be able to attain the position that their British counterparts would attain.

The oppression and the dictatorship did not remain confined only to the soldiers but it also extended to the civilians too. The impeachment of heavy land taxes, the propagation of Christianity further infuriated the soldiers as the agricultural family had their representatives in army.
The British not only showed their cruelty only to the peasants but also to the land owner as well as to the handicraft makers & artisans. The frustration of the whole mass added fuel to the fire and when the band of army decided to revolt against the Britishers, the people from all the communities joined to their cause.

The real question lies if the Revolt was an organized and planned one or was it just an impulsive reunion of all the infuriated soldiers. There has been a difference in opinions among the various historians about it being a planned and organized. The very prominent one being that the not a single paper or clue was found about the Revolt either before or after its occurrence. The circulation of chapattis and lotus flowers is still to be proved but its rumor did spread.

However, there are many reasons for it being a sudden and an unorganized one: 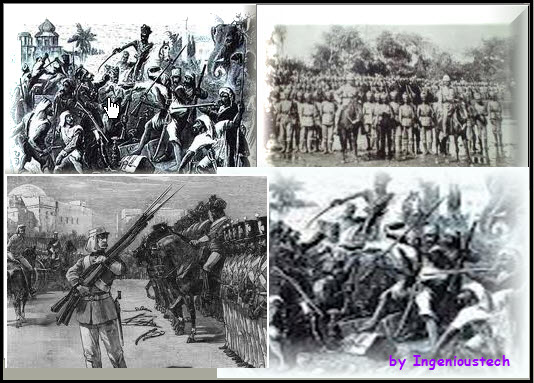 Although the soldiers showed great commitment and dedication for the revolt to reach its mass still there were some loopholes. If these loopholes had not existed, this Revolt would have succeeded to a great extent in its motivation. Few of them are:

Although the revolt failed to achieve its targeted objectives, but not all the sacrifices went in vain. The revolt was one of its own kind. The courage shown by Rani Laxmibai, Tantia Tope and Mangal Pandey during this period has embarked its name in the history of India. The revolt was a source of inspiration for the upcoming movements that took place in India later.

Hot Hits: 946
An act of goodness is of itself an act of happiness. No reward coming after the event can compare with the sweet reward that went with it.

Have you ever tried a lottery ticket?

Top reasons for divorce: Part-2 (1119 Hits)
No married couple wants to end up getting divorced. It is not like they have planned for it. They try to put up with their partners for as long as they
How to improve digestive health (717 Hits)
Due to our modern lifestyle, we feel that digestion related disorders are a common problem. Thus, we neither give importance to them nor seek any help
Top reasons for divorce: Part-1 (796 Hits)
The bond of marriage brings the two people together. Initially, everything may seem okay and both of them slowly start discovering each other in the journey.